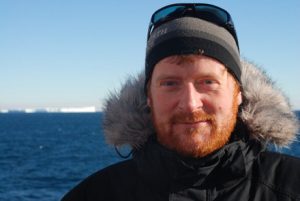 It’s been a while since I blogged. Just been too busy, working all hours in this floating city of science. Much has happened since the last post, Greenhouse sediments, tree ring like sediments, exploding cores, whales, icebergs and a live video conference with students on the other side of the planet…just another week in the office…
When I last blogged we were at the 2nd site we drilling down into the Eocene greenhouse period (>40 million years ago). Read Stephen Pekar’s blog to understand why that was such a big deal!
Then at our third site – called “the Adelie drift “- we had more successes, recovery of a super high resolution sediment core of the Holocene period (covering the last 10,000 yrs). This is a much more recent period of geological time – the period during which human civilization became established and the climate was relatively stable and warm. See Travis’s blog for more on the story. The cores are amazing – you can clearly see dark and lighter green coloured bands in the cores. These are called varves – each varve results from the annual life cycle of this part of the Southern Ocean. The ocean here is full of nutrients, so each spring and summer there is huge growth (a “spring bloom”) of millions of tiny diatoms (kind of microscopic floating plants). Then each winter the diatoms expire and sink down to the ocean floor. This happens each year and forms annual layers of sediment on the seasfloor 2cm thick, each one representing one year – like tree rings! Varves are found in some lake sediments but rarely in the ocean – and the extremely thick layers we recovered at the Adelie site are very rare.
One strange and new (for me at least) aspect of the Adelie site was exploding cores!! There is so much organic matter in the Adelie sediments that as it decays it produces as gas called hydrogen sulphide (H2S). H2S smells like rotten eggs, which is bad enough, but even more problematic is that as the cores are brought up to the ship the gas trapped inside experiences lower pressure and warmer temperatures (ask your teacher about Henry’s Law), this forces the gas to start expanding, but because it is trapped in the cores the pressure builds up. The technicians drill holes into the core liners to let the pressure escape, but in the first few cores weren’t fast enough and cores exploded and showered stinking, reeking mud around the catwalk (see Jamie Smidt’s photo below). It’s a testament to their dedication (even bravery!) that they carried on with the job without complaint (and reminds us all that this is a team game).

Whilst we were at the Adelie site I also hosted a live video conference with my students at the University of Glasgow. It was a great success, with a number of the scientists onboard taking part (thanks especially to Rob, Carlotta, Christina and Jorg) , and helping to explain to the students what we were doing and answering their questions (thanks to Cathy Stickly for the photos).

Finally, if that weren’t enough excitement for the last week we were visited by some whales and sailed past some sublime icebergs (captured by Matt Olney and Tina Van Der Flierdt respectively). Seriously, people that iceberg has an arch. A frickin’ arch!

Quote of the week ?: Jorg Pross to Matt Olney “Your physical manifestation at the core sampling table would be esteemed highly”.
What’s the food like?: Peaks and troughs, curry = good, mexican = good, oxtail satay = not so delicious. Can’t believe we are still getting salad.
What’s on the lab stereo?: A lot of Amiee Mann, a lot of Ryan Adams, the Small Faces and the Grateful Dead.
22
Jun 2017
By adminLeave a comment