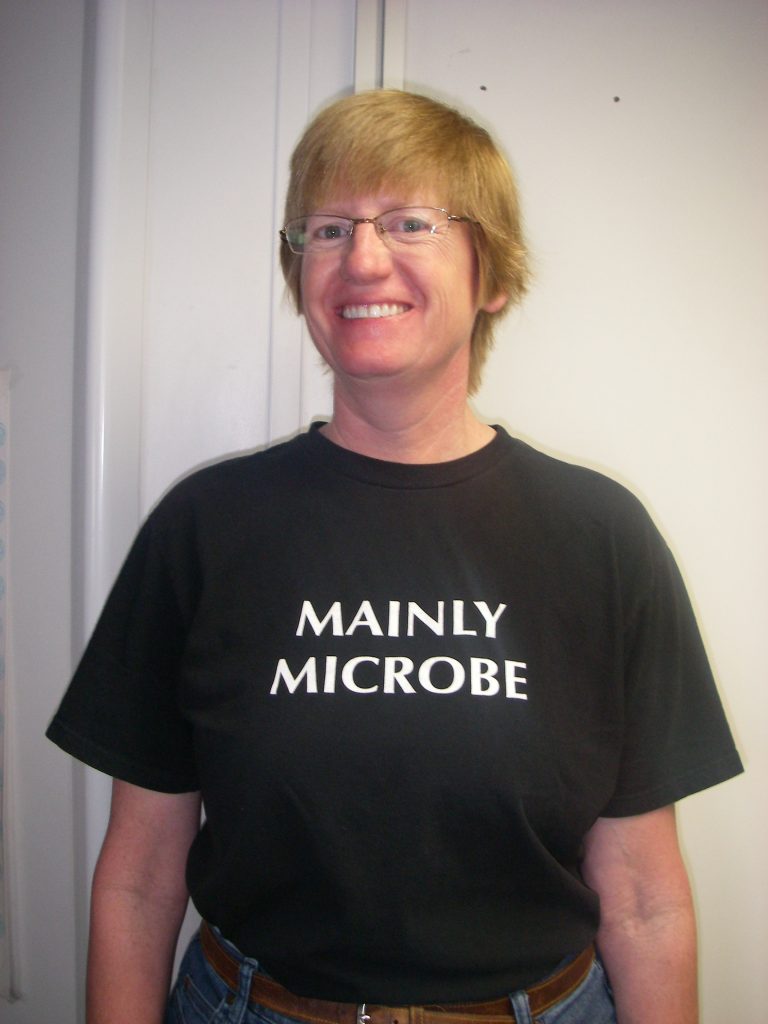 Happy Friday everyone! This week's Science Tee is modeled by Margaret Hastedt or Maggie who is a Marine Lab Specialist for Expedition 340. She works many places in the JR labs, especially with the Pmag, perhaps better known as the Paleomagnetism Lab. This lab is located within the Core Lab of the JR. There are 6 decks on the JR.Can anyone send a comment telling us what deck number the Core Deck is located? Six choices? This blog is a bit long but I hope you will find it helpful! Ahoy, Teachers, read on for 3 teaching resources from Deep Earth Academy on core-related physics.

Paleomagnetism is the study of the Earth's past magnetic field (also called geomagnetic field). When a rock or sediment is in the process of forming and is still in liquid form, microscopic grains of magnetic minerals align themselves with the Earth's magnetic field, like a compass. When the material solidifies, the magnetic grains are locked in place and keep the direction of the Earth's magnetic field at that point in time. The Earth's field changes over time, or reverses N and S magnetic poles). Paleomagnetists try to pinpoint the age of cored material by obtaining a sequence of reversals from the stratigraphy of the cored Hole and matching the sequence with a known set of global reversals.(over 83 million years).

Shipboard paleomagnetists provide paleomagnetic and rock-magnetic measurements of recovered rocks and sediments. The measurements are used to construct a magnetostratigraphy for each site and to study its paleomagnetic and tectonic history. The instrument pictured above is a pass-through cryogenic magnetometer and it provides a high-resolution recording needed to study magnetostratigraphy and magnetic field behavior. Photo credit IODP

'Iron particles occur in many sediments and rocks. As these very fine sediments fall through the water column they orientate themselves to the direction of the earth’s magnetic field. As they get buried by other sediments their position is fixed and they cannot move or re-orientate, effectively recording the direction of the field at that point in time. Over time the poles reverse and this is recorded by other sediments being deposited at that time which themselves get buried and become fixed.

We measure the direction of these particles in the sediment much like a compass points to the North Pole today. We often see changes in the direction of the magnetic particles in the sediment which is related to times where the poles flipped. These boundaries (or reversals) are a global signal and are well dated through time, thus we can compare times in our record where the directions change to these reference curves to date our sediments. This is called magnetostratigraphy.

The last reversal was 780 thousand years ago so you need a long record to see one. However before that they are more common. You are able to get very accurate dates on your sediment every few hundred thousand years.'

Expedition 340 paleomagnetists, Takeshi Saito (pictured above; photo credit Tatsuya Adachi), also takes discrete samples of the cored material that can be demagnetized either thermally or at alternating fields up to 100 mT. These results can then be compared to the archive-core half results to determine whether secondary magnetization components were adequately removed.

What is a mT is milliTesla? This unit is used to tell the strength of a magnetic field. The earths magnetic field is about 0.05 mT, for example a fridge magnet is about 5mT and the field produced by magnetic tape (e.g. a cassette) is about 0.025mT so we are dealing with really small magnetic fields.

Other information from paleomagnetics include determing if the material has moved North or South of its original place of origin, if the material has rotated or been remagnetized, and the intensity of the Earth's magnetic field at the time of formation. Parts of this blog are recycled from Klayton Kurtis'  (Paleomagnetist Specialist, IODP-TAMU) text for 2005 School of Rock Expediiton.

Magnets at the Core – Grades 7-12. Students use core models made from swim noodles with embedded magnets and compasses to measure and record magnetic orientation. These model cores simulate the magnetic fields recorded in real deep-sea sediment cores obtained

A World of Physics: Extracting Physics from the Earth and Sea – Grades 9-12 | Undergraduate. A World of Physics will introduce students to the intersection between physics and earth science. The poster front depicts Earth’s magnetic field lines emanating out from the magnetic poles, creating an intriguing pattern. Utilizing background information supplied on the poster’s reverse side, students will learn about paleomagnetism and the physics of sound and seismic waves, which are used extensively by ocean drilling scientists.

How Old is It? Part 2 – Magnetostratigraphy (Paleomagnetism) and the Geomagnetic Polarity Timescale  – Grades 9-12/Undergraduate.  Students learn how paleomagnetism is used to accurately date cores of rock onboard the JOIDES Resolution.