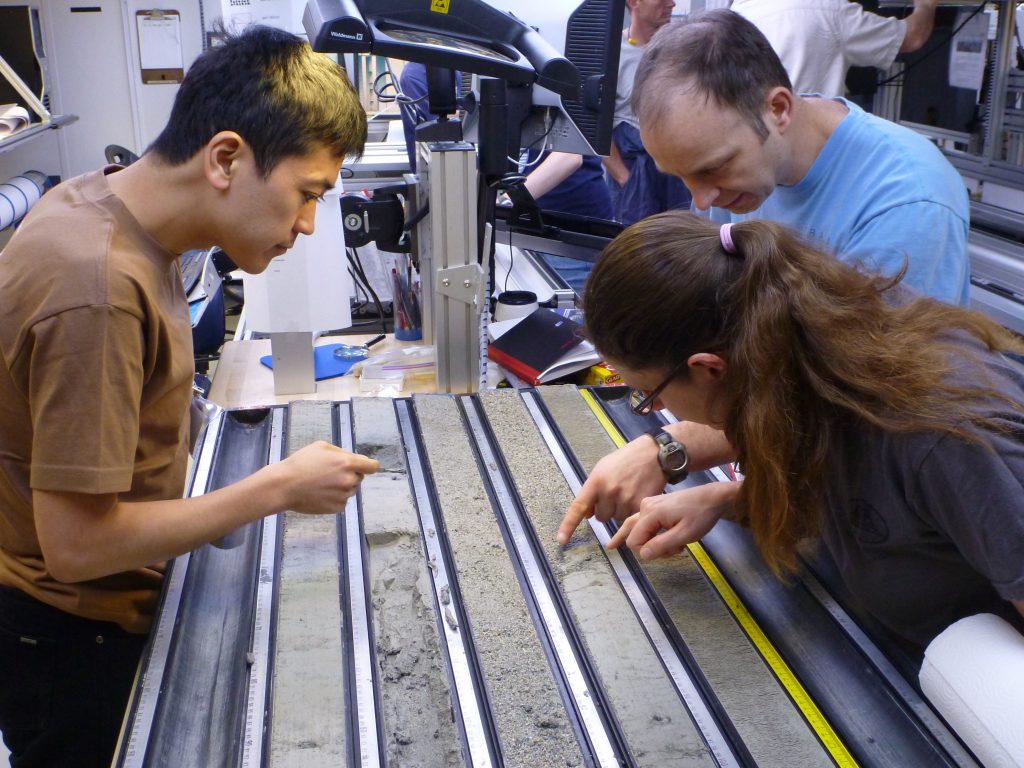 Before summarizing this week’s science findings, let’s talk about some rock types and layers (strata) that are visible in the cores we are recovering. We are in a volcanic setting so many of the rock fragments are volcaniclastic, which are small fragments of rock that originated from erupting volcanoes, like the Soufrière-Hills volcano on Montserrat. From the sea are bioclastic materials which are the remains of marine critters skeletons, corals and shells found in the sediments. Of course basalt is commonly extruded from volcanic rock and is usually gray to black, fine grained material. While blocky lave or andesite is most common after basalt and what we are recovering during this expedition. Andesites are usually light to dark gray (sometimes reddish to greenish) and fine grained. Andesites have lots of silicon which makes them highly explosive. Teaser Photo credit, Daisuke Endo, 340 Sedimentologist/Volcanologist

Structural geologist, sedimentologist and volcanologist look at how the rock fragments and sediments are arranged in the core which tells them the processes that deposited the sediments and the shape and grading of the sediments are interpreted by the Expedition 340 core describers using words like tephras, turbidites, and hemipelagics. Most often the sediment and rocks are interbedded or ‘mixed’ with one another.

The picture above shows a section of one of the cores retrieved by the JOIDES Resolution drilling crew during Expedition 340.  What you see are hemipelagic sediments (light colors) interbedded or “mixed” with volcanic rich sediments (darker color).  You will notice numerous bands of different colors made by marine organisms that live within the sediments (infaunal).  This process is called bioturbation and it occurs after sediments have been deposited.

Tephras are fallout deposits from volcanoes, such as pumice and ash– anything that falls out from the atmosphere into the ocean during an eruption. Above photo credit, Anne Le Friant, 340 Co-Chief scientist. Turbidites are seafloor deposits that are formed by turbidity currents and can be layered so the bottom layers contain the coarsest grains (sands) and the upper layers are the finest (clays). Hemipelagics are deep sea sediments that settle from the ocean water above the seafloor and may originate from marine critters, volcanoes or land.