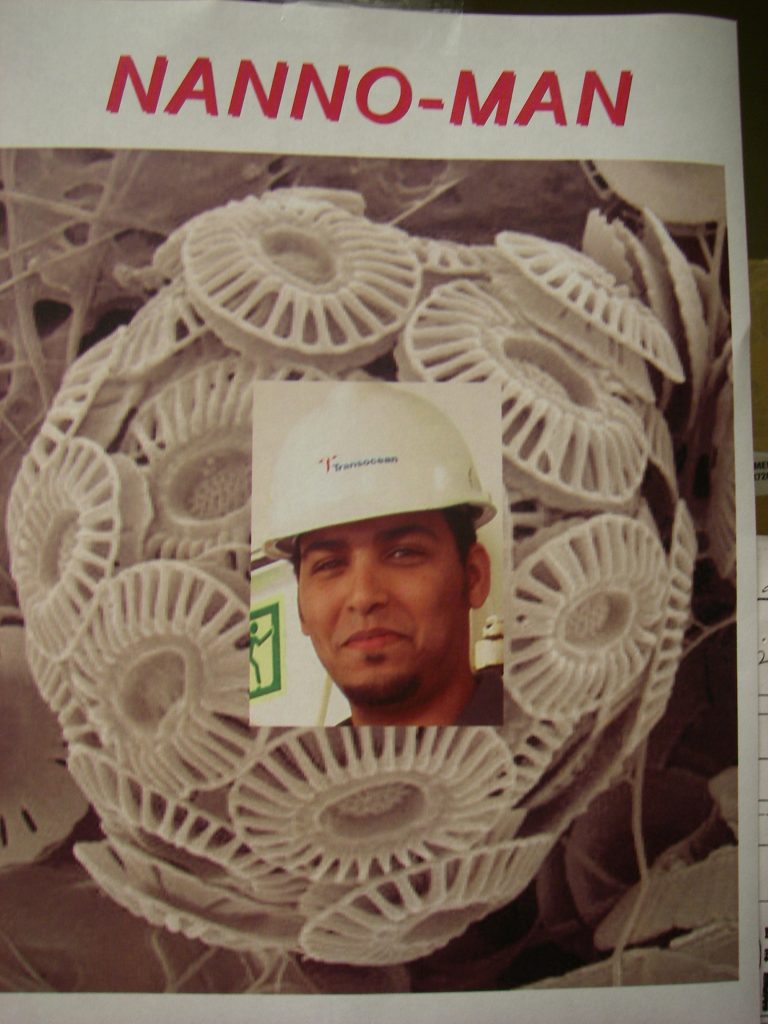 Mohammed Aljahdali, or the ‘NANNO-MAN’ as the scientists of Expedition 340 call him, is a graduate student from Florida State University, Department of Earth, Ocean & Atmospheric Sciences. Read on to find out more about his major and important role in Expedition 340: Lesser Antilles Volcanism and Landslides. Hello, my name is Mohammed Aljahdali, a Saudi Arabian graduate student at Florida State University. I am a student of one of the contributors to this field of micropaleontology, “Professor Sherwood Wise”.

I mainly deal with Calcareous Nannoplankton, those golden-brown algae which are restricted to the photic zone (the upper 200 meters of the water column) of the ocean. Coccoliths, the informal name of Calcareous Nannoplankton, are extremely useful for both age determinations and paleoenvironment information, and I have wide range experience in that field. They are called Nanno because their sizes range between 20 to 2 microns (1 millimeter is equal to 1000 microns). They are so delicate and small that only a Light Polarized Microscope can be used to ‘see’ them.

The first appearance of Calcareous Nannofossils in geological history was in the Late Triassic, or ~200 million years ago. They are used for finding out the age of sediments because their evolution (changing into different species) through geological time was high. Each strata (layer of sediment) within the earth is dominated by an index species or a “MARKER”. We call it a marker because it is used to indicate the time or age of the sediment. We designate species markers based on different criteria such as having a short range of living and a wide range distribution (global).

So we know that within a certain time (for example Emiliania huxleyi was alive between 250,000 years ago and now) a marker species will be dominant within the strata and other scientists in different places around the world can easily find this species. Below is what Nannofossils look like under the Light Microscope. We normally find thousands, or even millions of species in a piece of sediment the size of a pea.

Another genus, the Discoasters, have star shaped species. This genus has evolved in the Paleocene (65 million years) and went extinct 2 million years ago.

Although I am working with the best Foraminifera Micropalentologists, my sampling method for Nannos is different from them. I only use a small amount of sediment (the size of a pea) scooped out with a wooden toothpick or spatula. I then smear this over a glass slide and then look at it under a microscope.