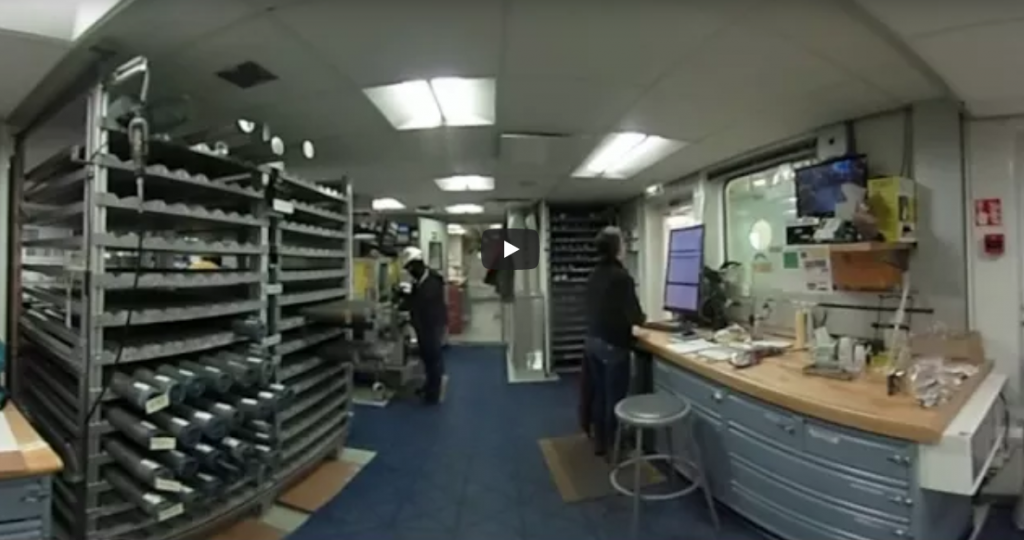 Experience the lab space on the JOIDES Resolution in 360

Use your computer mouse to click around a full 360 degrees in these videos to get an idea of what the labs are like while operations are happening on the JR. In each of the perspective, scientists move around in their workspace, while the cores are being brought in from the catwalk (check out our 360 of the catwalk in a previous post), the cores are split, described, photographed, and tested in different ways.

This view shows you where the cores are first brought in from the catwalk. They are first engraved with a laser engraver with the expedition number, site number, and hole number, and then stored on the racks for a few hours so they can equilibrate to ship temperature and pressure. If you turn around, you can see the main part of the lab.

This gives you another perspective of the core splitting room, as well as the stratigraphic correlation and physical properties portion of the lab.

This second lab view gives you a look at the main part of the core lab, with the archive table and working half table, where the two halves of the core are laid out. The screen gives us information about where the drilling process is at.

In this perspective, you can see microbiologist Shiv taking high resolution photographs of the cores. You can also see sedimentologist Molly looking at the archive halves of the cores and working to describe them.

This view shows paleomagnetist Tim pulling out some of the section halves to run them on the magnetometer. This tells him about the direction the magnetic field was pointing millions of years back in time.

This view shows you some of the work stations of the scientists in the core lab, and also gives you a perspective of the Section Half Multi Sensor Logger (SHMSL).

This is the physical properties part of the lab, where scientists look at the radiation, magnetic susceptibility, and p-wave velocity (which tells us about density) of the whole rounds of the cores.

Another view of the micropaleontology part of the lab.

This is the geochemistry lab, down one level from the main core lab. You can see geochemist Justin in the foreground performing a titration and palynologist Francesca talking with Captain Terry by the fume hood.