A lesson learned from a videoconference with the JR

2012 and who/what's the education officer on the JR
Ship ahoy!!! 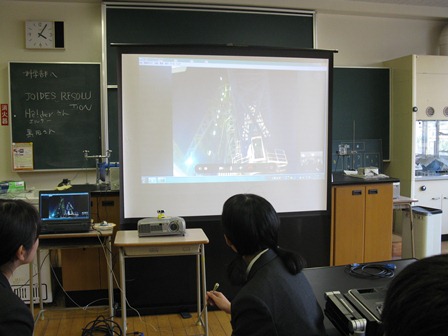 During the last week we had a video conference with students in Sasebo-Nishi High School, Nagasaki Prefecture, Japan.

The host of Sasebo-Nishi High School was Mr. Yasuhiro Taguchi, a Science teacher who has joined "School of Rock 2009" during IODP Expedition 321T. Three of the four participants students are members of the Sciences Club, and the other one is member of the English Club. We showed them the ship's Derrick, Catwalk, and Core Laboratory. Before ending the videoconference we also had time for a session of Q&A and we were able to answer student’s questions.

We really enjoyed talking to Mr. Taguchi students. After the video conference students sent us their feedback about the videoconference. They also enjoyed talking with us and they told us that they learned an important lesson. They have realized that for understanding Earth's history a multi-disciplinary scientific approach is necessary, i.e., the scientists on board the JR study not only Geology, but also Physics, Chemistry and Biology.

Explaining the core flow aboard the JOIDES Resolution

Q&A session from the JOIDES Resolution to Japan