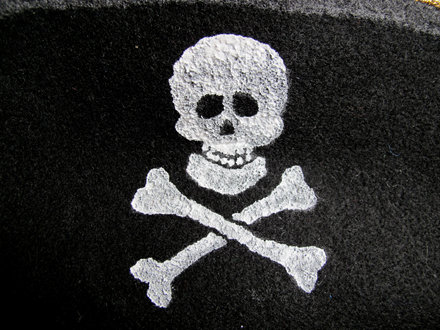 MacGyver was a resourceful secret agent on TV in the 1980s who was famous for being able to solve any problem he encountered with everyday materials he found lying around. We’re not secret agents out here, but that’s a pretty good description of everyone putting together some pretty amazing Halloween costumes with office supplies, a little bit of felt, and a lot of imagination!

After staring at the box of felt for over a week, I finally decided on a pirate costume (thanks to some inspiration from one of the scientists who said that no shipboard Halloween party would be complete without a scurvy pirate). I knew it would need a hat, vest, sash, boots, sword, and (of course) a parrot for my shoulder.

I made a tricorn hat (like the one Captain Jack Sparrow wore in Pirates of the Caribbean), a red vest, and a pair of boots out of felt and a stapler. I was amazed at how easy it was to “sew” with a stapler! I just hope it stays together long enough to enjoy the party!

We found some fabric paint, so I painted on a skull and crossed bones on the hat, and added some gold detail on the vest. As a tribute to my little boy at home, I used the Wiggles’ friendly pirate friend Captain Feathersword as my pirate model! (Sadly, I didn’t bring along my feather sword, so I’ll have to be a swashbuckling pirate instead!)

As for my parrot friend…here I put my mad PhotoShop skillz to work and created a fine pirate macaw. I plan to put him on a piece of cardboard and somehow tape him to my shoulder. Do I hear duct tape? Any true MacGyver costume wouldn’t be complete without it!

Stay tuned for pictures of the final costume…on Halloween!