Dolphins again
A Cork In The Hole 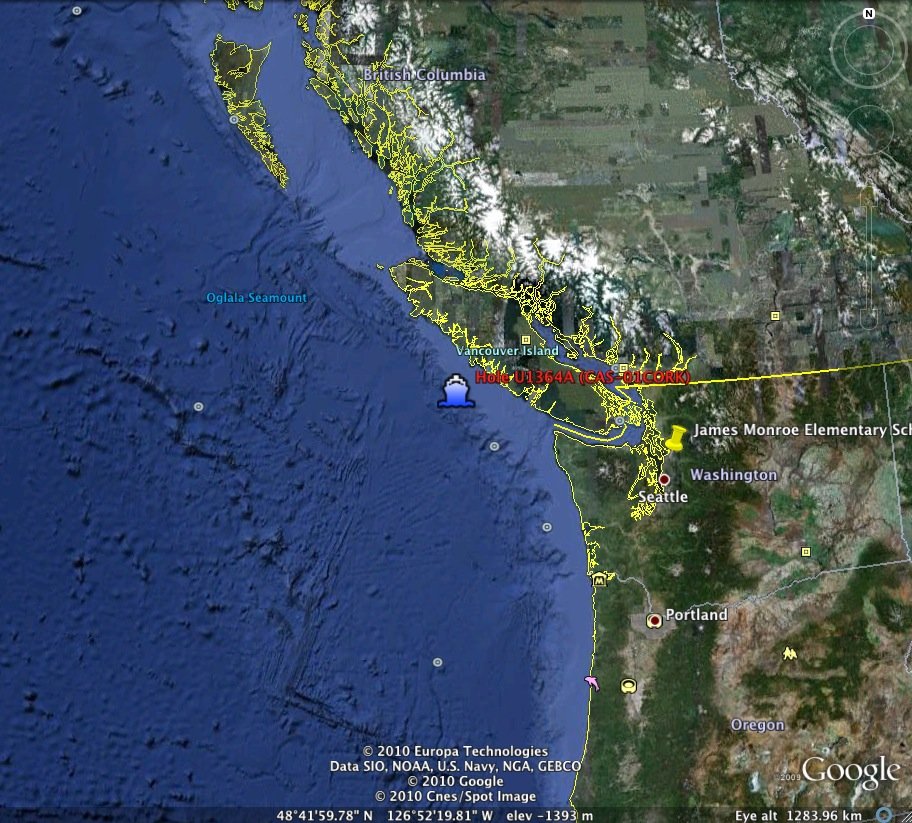 Question: We were wondering if you are having a good time.

Most of this has been really fun and interesting. I’m learning a lot and I really, really enjoy learning — and I like doing things I’ve nbever done before.  Today, though, I got seasick.  That’s no fun.  Fortunately, I never threw up, but I sure felt like I was going to. Yuck.  I went to take a nap at a little before 2:00 this afternoon to help make me feel better and I slept for almost six hours!  The waves were really big and rocking the boat a lot when I went to sleep.  It’s much better now, and I feel much better now.

Question: How far are you from shore?

We’re about 50 miles from shore.  To give a better idea of how far fifty miles is, I made a map with a 50 mile range ring around Windermere Elementary School.  A range ring shows everything within that distance on a map.  So you can see that we’re not quite as far from shore as Windermere is from Rochester or Toronto.  Of course, it’s more than a 50 mile drive to Toronto because you need to drive around Lake Ontario.

The little map at the beginning of this post shows our location off the coast of British Columbia and not too far from the State of Washington.  You can click on it to make it bigger.  There’s a ship icon where we are, and it’s labeled with the name of the hole we just put a CORK in.  I also put James Monroe Elementary School on the map.

Question:Have you been able to see the ocean floor yet?

When you wrote the question, we’d not yet seen it, but we have now.  Just a little bit ago we placed the CORK into the ocean floor.  The CORK is an observatory, loaded with instruments that take measurements of lots of different kinds of scientific information.  A camera is attached to the drill pipe that lowered the CORK to the floor, and we were able to watch it on the ship’s TVs.  Before the CORK was sent down, a hole was drilled and we were able to watch that too.  I’ll bring home a styrofoam cup that went down to the sea floor and got smushed by the weight of the water above it.  I posted a picture of that cup in my last blog post.  I like the picture, so I’ll post it again here:

Question: What was your most frightening moment?

Nothing has been really frightening, though I was worried about throwing up earlier. Every now and then we here noises which we’re not used to – right now there’s an alarm going off.  It means there’s a door open.  The first time I heard it, it worried me a little, but then someone told me it reminds them not to leave doors open.

Quesion: If there is an earthquake under the sea where the ship is, will you (on board) feel it? How will you know it is happening? We have talked about how we could make a model that would test this, but have not come up with a great idea yet. Any hints?

We wouldn’t feel it.  Or maybe I should say, I wouldn’t notice it. If it was an earthquake that caused a tsunami (a great big wave caused by an earthquake), the ship would raise up and go back down as the tsunami passed us, but not by more than a few feet, and it wouldn’t happen very fast. If we were closer to shore, where the water gets shallower, it could be a different story and be dangerous — but we’d have to be a lot closer to shore for it to be problem.  Tsunamis do their damage when they reach shallow water, and the water sort of stacks up on top of itself.  Once tsunamis are close to shore they can be tens of feet tall and rush onto the shore doing lots of damage.

If there were an earthquake now, we’d know right away as the observatory we just placed on the ocean floor has a seismometer in it.  Seismometers are instruments used for measuring earthquake waves.  That’s the only way I’d know an earthquake was happening.  Someone who really knows the ocean and has spent lots of time on ships might be able to tell a tsunami from the other kinds of waves, but I wouldn’t know the difference.

I’ll take an educated guess at how you might test and ask some of the scientists on the ship what they think and update this in the next day or two.  If you have a big tank, and a way to make waves that are pretty regularly forming, then you have a model for the way things usually are.  Put a toy boat in for a model of the ship. You might make waves with a big fan blowing across the water. Most waves are made by wind. Then create a model of that special wave that is the tsunami. That happens as a result of parts of the Earth moving suddenly as pressure is released along a fault.

Dropping a big rock into your tank wouldn’t be the same thing, and it would make a big splash when it hit the water, so there are some problems with that model.  And you might crack your tank.  Maybe you could attach a rope to a board on the bottom that you lift up to make that sudden underwater motion of the seafloor. I don’t know if that’s a very good model. Maybe you can try it out for me and see what happens.  I’ll do another thing that scientists do to see if a model or idea is any good — I’ll talk to my colleagues and see if they have any good ideas and then I’ll get back to you.