It takes a Village
Working in the core lab 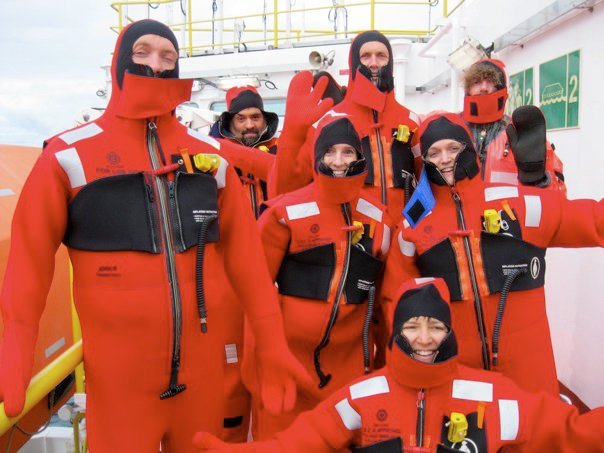 Question: When you go into the earth do you fly a big rocketship?

We’re in a really big ocean ship that sticks a drill down into the ocean andthen into the ground underneath the ocean. The ship, called the JOIDESResolution, used to be used for drilling for oil, but now it’s used to learnabout Earth.  It has lots of different science laboratories that make themain part of the ship as tall as a seven story building.  It’s even tallerthan that though. The ship has something called a derrick (which most shipsdon’t have) that the big drill comes out of. It makes the ship as tall as a 20 story building!

Question:  When you drill what do you take with you?

We have lots of things that we take with us for the drilling. The mostimportant things are the special ship and lots and lots of drill pieces. Thedrill is a lot different than one you might have at home, partly because it’sso much bigger, but also because the drill bits connect to one another so itcan reach over a mile down through the ocean and into the ground at the bottomof the ocean and keep on drilling. It’s also different than any drill you haveat home because the drill is kind of like a straw. We’re not just drilling ahole, but taking the stuff out of the hole up through the middle of the drillso we can study it.

If you can imagine a lot of soup cans stacked up on top of each other to make atower, that’s about the size of what we call core samples would be, but it’smostly made up of mud. Sometimes it has fossils in it, which are usually reallytiny. Sometimes it has things that look like ice, but it’s a very special kindof ice called methane hydrates (a bigger pair of words than you need to know).Those chunks of special ice are interesting for a lot of reasons, but maybe themost exciting reason is that it’s ice you can light on fire!

There are pictures of that here:
http://climatechange101.blogspot.com/2010/09/sailing-on-joides-resolution-and.html
That also has a picture of a section of core samples.

Question:  Do you go in the water?

I hope we don’t go in the water because it’s really cold! Thursday morning we had an emergency drill. It’s like a fire drill, but being ready for anemergency on a ship means being ready to be safe in really cold water. In our drill, we put on survival suits that would allow us to float and stay warm in the water if there was an accident. The good news is the people I’m working with have been doing it for many, many years and none of them have had to put on the survival suits except for during the emergency drills.

The picture at the top of this blog post is me and some of my friends in our survival suits — they are pretty funny looking. They call them Gumby Suits. Gumby was a funny looking cartoon character from when I was a kid.

Teacher’s Question:  Why is your job important?

I do that in ways that are mostly about how understanding how Earth works. While I’m on the JOIDES Resolution, we’re trying to learn about what the Earth’s climate used to be like, partly so we can understand how weather and climate might change in the future. We’re also interested in learning about those methane hydrates that I wrote about in answering one of the questions above. Those aren’t just special because you can light them on fire, but because if they melt faster than they form, they might make the world warm up faster than we’re used to and that could cause lots of problems. Scientists might also be able to eventually figure out how to collect methane hydrates for fuel and that could be less bad for the world than burning coal or oil.

On this trip, we’re also installing instruments that will help us to learn about earthquakes and maybe to eventually better understand when and where theymight happen.

Question:  Are you going to find any fossils?

We will look at fossils that were collected the last time the ship went out,that nobody has looked at yet. It turns out we’re not going to be collecting any core samples on this trip, but we will look at materials that were just collected earlier by other scientists, engineersand technicians on the ship. Those fossils will mostly be really tiny and we’ll need to look at them under a microscope. Some of them are really pretty once you do look at them under the microscope. What they look like can tell us something about what it was like when they formed.

You all asked some really good questions! Send more!

Thanks, and feel free to send more questions!
Mr. Duggan-Haas