Arriving on Station
Shout Out to NSTA! 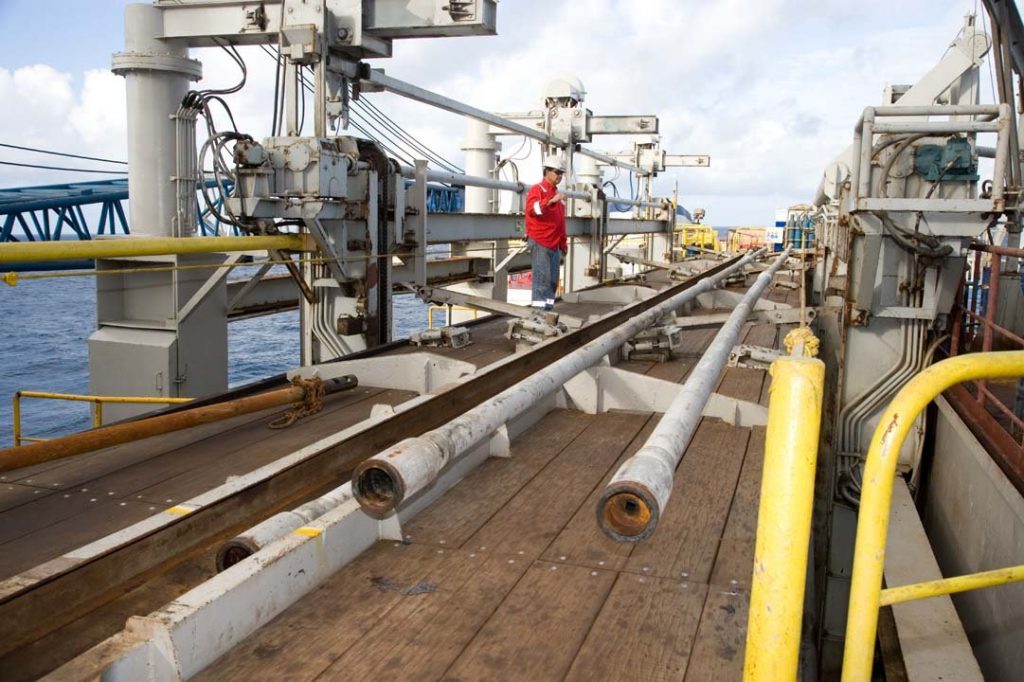 ARRIVING ON STATION     We arrived over the first drill site close to the end of day shift on March 14.  Paul, Jens, Carl, and I watched as the crew lowered the thrusters into the water below the ship.  There are several thrusters distributed over the length of the ship that are used to counteract the motion of ocean currents and wind, which would otherwise push the ship off station.  This is critical because a ~5100 meter long pipe was constructed that now connects the ship to the seafloor.  The pipe is rather ‘bendy’ but the ship needs to stay directly over the site (to within 2% of water depth; remember your trigonometry?) and the thrusters communicate with GPS satellites to maintain position.  We are located at 12 deg N, 142 deg W, about 1080 nautical miles southeast of Hawaii.

TRIPPING PIPE     It took about 24 hours for the drill pipe to be assembled.  There are hundreds of 30 meter segments stored aft of the lab stack on the main deck.  There is a complex system of elevators, conveyor belts, and other equipment that guide the pipe lengths onto a track.  The pipe lengths are lifted up to the top of the drilling derrick until they stand vertically, and are then lowered through the moon pool and into the water below.  Each new pipe length is screwed onto the one below.  In this manner the drilling team reached the seafloor and began to clean the inside of the pipe to prepare for coring.  All told, the drill pipe weighs about 600,000 pounds!  While the pipe is down, the JOIDES Resolution is flying nautical symbols that tell other ships we are unable to move off our current position.

CORE ON DECK     The first core arrived on deck around 8am on March 16.  It was a very busy day for everyone on the ship.  The core was run through the track systems, Carl and I were able to process three cores before the end of shift.

There were a few delays with equipment and computers, but in the end we were able to do what needed to be done.  Everyone is excited to have sediment to work with.  After working with DSDP/ODP/IODP samples for so long, it is incredible to participate in the coring process.

Aside from working, I’ve been able to exercise daily, read books, do some work I brought on board with me.  Mostly, I enjoy interacting with other people on the ship.  Whether we are working or relaxing everyone seems to agree that the group works well together.  Many of us enjoyed watching a shark chase some mahi-mahi, and the squid have been chasing the flying fish out of the water.

That’s all for now.