At one with the sea

Ready for hard work, she is

At one with the sea

Although this has been done many ways, I’m going to give you my own tour of the JR.

JR is short for JOIDES Resolution. JOIDES means Joint Oceanographic Institutions for Deep Earth Sampling, and the Resolution was Captain James Cook’s ship of choice and used for exploring the Pacific Ocean in the 1770s. The JR is amazingly equipped with facilities for sailing, for doing science, for eating and sleeping, and for chilling out.

Here’s some images of the infra- and exo-structure of the JR. 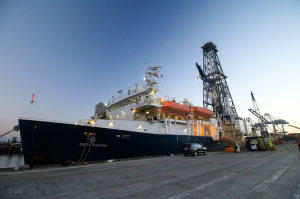 THE JR at dock taking on supplies. The giant derrick amidship is used to push pipes in and pull pipes out of the ocean floor. We rely on this technology to do our science. 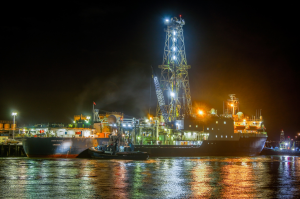 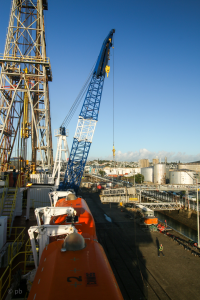 The JR using one of her cranes for loading supplies for our 2-month journey. The orange things are lifeboats; there are two on each side capable of carrying dozens of people. I’m assigned to lifeboat 4. Because of the latitude of our cruise (pretty far south), we are required to bring not only our life jacket, hard hats and goggles with us when we train for fire drills, but also our immersion suits. I’ll show those to you another time. 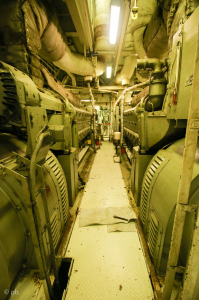 Six locomotive engines create energy to run the JR: propulsion, electricity for my razor, and air conditioning, to name a few amenities. 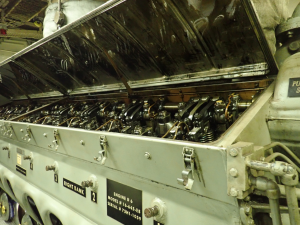 Look at those rocker arms! Because we are sitting at one site and not using our full propulsion capabilities, the engineers opened one of the engines to show us the working parts. 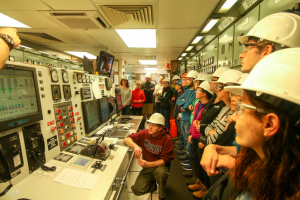 We are getting a tour of the control room where they manage everything from air handling and ship speed to fresh water production and vacuum toilets. Hmmmm. A very important place!

Next time, I’ll show you’re the drilling operation. Thanks to Philipp Brandl and John Jamieson for some of the pictures.

boatboatscranederrickdrillengineEXP376IODPjoidesJRlifelife-boatsresolutionship
25
May 2018
By Frank Tepley IIIDrilling, Life at SeaLeave a comment

Author:
Frank Tepley III
About:
I am an igneous petrologist interested in subvolcanic magma chamber processes and volcanic evolution. I work in the College of Earth, Ocean, and Atmospheric Sciences at Oregon State University.
More articles by: Frank Tepley III