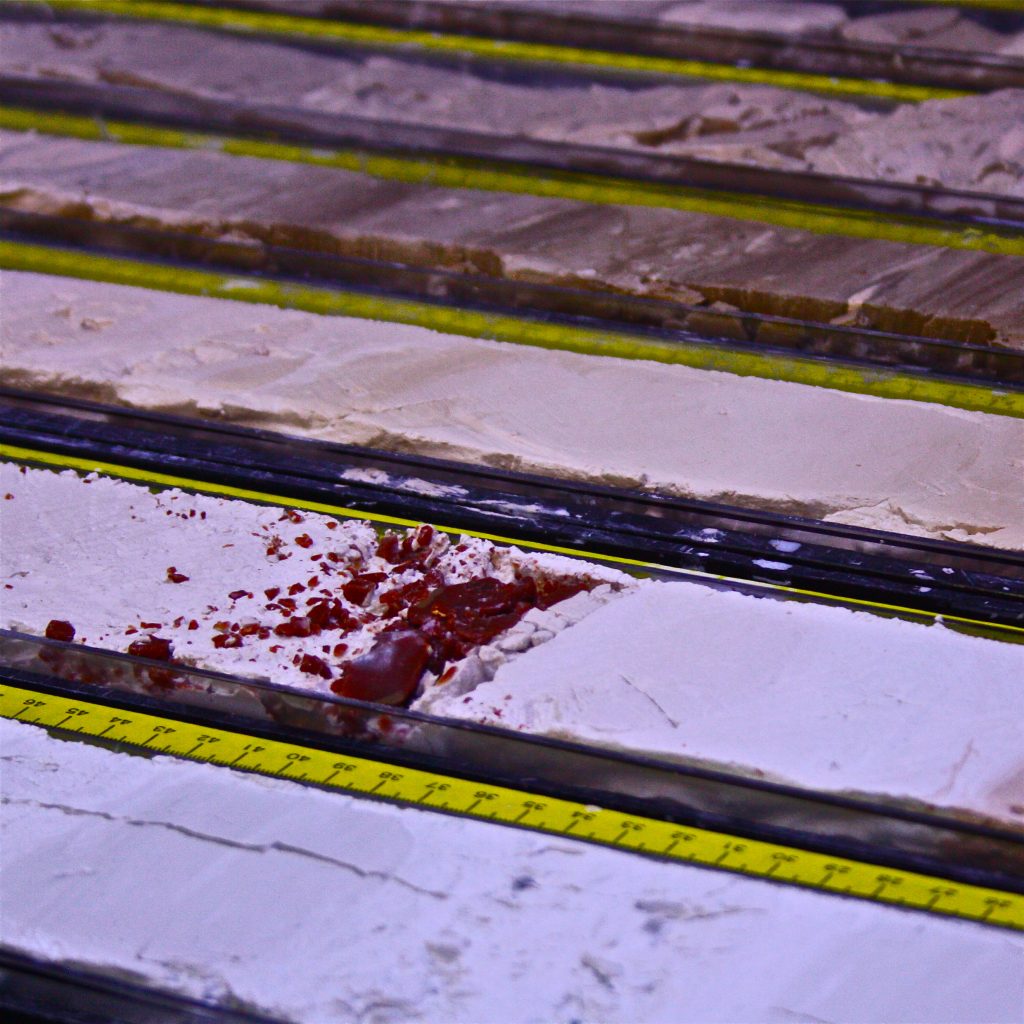 What an exciting night! We knew there was something special about this site after the first few cores were brought up. In the last 24 hours we traveled back 120 million years! We were all hoping that our current site would be reminiscent of the first, giving us the “greatest hits” of Earth’s Climate events. Well, it’s not, but what we’ve found here is totally different and extraordinarily cool!

About 93 million years ago, during the Cretaceous, there were a few major anoxic events. Ocean Anoxic Events, or OAEs, happen when the Earth’s oceans become completely depleted of oxygen. The occurrence of anoxic events is linked to changing ocean currents, increase in greenhouse gases (like carbon dioxide) and a warming climate. These global events have happened many times and are recorded in the geologic record as a thick layer of black carbon-rich shale with no evidence of marine life.

THE core! Look at the contrast between the black anoxic sediment and the white fossil rich sediment! (Credit: Paul Bown)

Imagine the greenhouse world of the cretaceous – huge volcanoes were spewing carbon dioxide into the oceans and atmosphere, it was hot, there were lots of plants, and, in general, the warm wet climate increased the rate of rock weathering on the planet. In the oceans, phytoplankton flourished. The increased amount of weathering washed huge amounts of critical nutrients like phosphate and nitrate into the oceans. Phytoplankton, small marine plants, depends on nutrients and carbon dioxide to grow, and now they had plenty of both. The result: a phytoplankton boom!

As the exploding phytoplankton population used up the available nutrients they died. The dead phytoplankton rain down into the deep-sea and act as a macabre fertilizer for microbes. These microbes use up huge amounts of oxygen as they feast and decompose the dead phytoplankton. The combination of decay and increased bacterial respiration was so extreme that it caused a global anoxic event. The Cretaceous OAE, also called the Cenomanian-Turonian boundary event or OAE 2, created an ocean starved of oxygen for nearly half a million years. A huge extinction event followed, killing off over 25% of marine invertebrates and charismatic marine reptiles such as ichthyosaurs and many types of pliosaurs (short necked fearsom plesiousaurs) .

It is critically important to understand OAEs of the past because we are seeing an increase in ocean anoxia today. Modern changes are not at the same scale as the Cretaceous, but there are many areas where the human population has increased the amount of nutrients being put into the oceans. Combining the ever-warming climate with the increased nutrient runoff has caused an explosion of anoxic zones in the ocean. Naturally occurring low oxygen zones are regular features in some areas of the ocean, but these new anoxic zones are usually found where human population density is highest. By studying the OAEs of the past we gain a better understanding of both the ocean’s response to anoxia as well as how the global systems eventually recover from these extreme events.

As if everything wasn’t exciting enough, a few cores below the OAEs the drill went “clunk” (a very technical term). We brought up a core filled with just one meter of material. That one meter was awesome! We had found limestone from the once balmy shores of a 120 million year old coral atoll. The limestone that came off of the core catcher was broken into small rubble and had lots of fossils. We saw the impressions of coral skeleton (complete with perfectly preserved polyps), echinoderm spines, the beautiful skeletons of red algae, and more. Just think about how different the North Atlantic was 120 million years ago – we are 11 miles away from the final resting place of the Titanic. Today there are storms and icebergs where there was once warm sandy beaches and coral reefs!

The impression of coral polyps in the limestone rubble found in the core catcher.

Coral and red algae impressions in the 120 million year limestone!