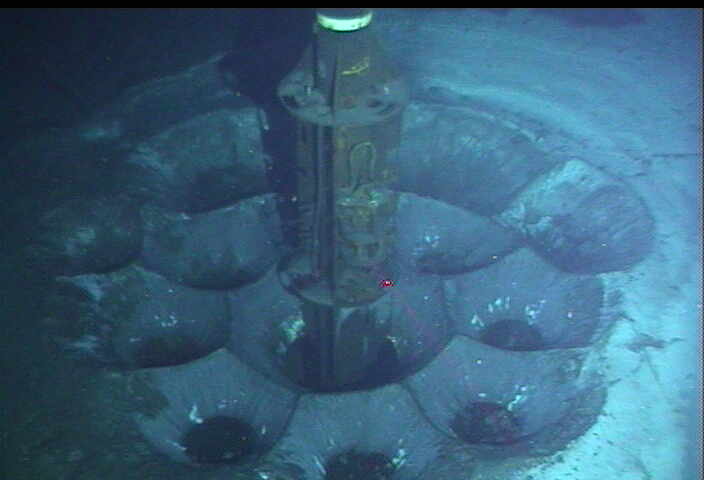 Another update from Katie Inderbitzen aboard the R/V Atlantis regarding the CORKs on the Juan de Fuca Ridge flank.

Well, we were fortunate to only spend about a day in Astoria!  Dodged a big bullet on that one….perhaps aided by all this Kevlar on board!  And despite some very big swell which made for an exciting recovery yesterday, we dived to check out the status of the CORK at 1301A.

Turns out that we were not as successful as we had hoped during 321T.  There is still warm water venting around the outside the CORK…Andy and Dustin observed lots of shimmering water during yesterday’s dive.  What was originally a nice flat “patio” around the wellhead has now turned into a moonscape of cement.  It looks like the cement didn’t set up quite quickly enough and thus sank down into the annular holes surrounding the wellhead and likely into the open hole.  Very frustrating.

Despite this result, the dive went smoothly…we recovered the short instrument string in 1301A (this will be replaced by a long string during today’s dive) and downloaded pressure data, then went to the CORK at 1027C (~2.4 km away) to download data and pick up a battery pack (in preparation for replacing the CORK).

It was also a big day of firsts!  Not only was it Dustin’s first dive, it was also pilot Dave Walters’ first solo dive after becoming an Alvin pilot!  As a result, they both received an on-deck greeting of ice cold seawater!  (pictures coming soon!)

Last night we deployed the new 1301A instrument string and I’m hoping that, in a few hours when the sub starts to put it into the hole, we can get this installed and going!  Tomorrow’s dive is a PIT (Pilot In Training) dive, which I will be going on to download more data from 1301B and 1026B and attach a recovery system to 1301B’s instrument string!