Be Whole! Or Hole B? 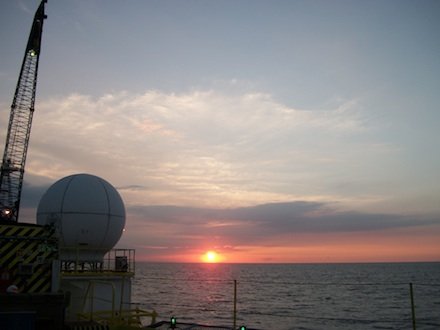 Scientists at Work
We were able to recover whole-round, section half, and discrete sample measurements throughout the day using the Advanced Piston Corer (APC) down to 181 meters below seafloor (mbsf), but then things started getting tricky.

They had to switch from the APC, which is good at recovering undisturbed soft to firm sediments, to the Extended Core Barrel (XCB), which can recover moderately hard samples.  The cutting part of the XCB is pushed out in front of the main drill bit in soft sediments, but then retracts when it encounters harder rock.  The hole turned out to be unstable above the drill bit and kept collapsing.

The core that we were able to recover was dark greenish to greenish-gray clay, with some ash layers.  Apparently, some of the sediments were deformed by gas expansion as they were brought to the surface, and there was evidence of possible gas hydrates in some. The microfossils collected put the age at somewhere in the Lower Pleistocene.

As there were still issues in drilling and core recovery, the decision was made to move our position a short distance and try drilling another hole.  We moved the ship about 300 meters in the S/SW direction and started drilling a new hole.  This new drill site is called U1412B.

When we heard “Core on Deck” again this evening, hopes were high, but dashed when it turned out to be liquidy greenish muck that drained out onto the Core Deck floor when they tried cutting the case.

Our incredible cooking staff, with Efren Adona as Assistant Chef, puts on a fabulous show every night ranging from down home roast beef and potatoes to gourmet vegetarian delights, and beautifully arranged and delightful tasting desserts.

From 1900 meters above sea floor, Hole B, west of Costa Rica where beautiful sunsets abound…