Chicxulub Crater cores are not what JR fans are used to 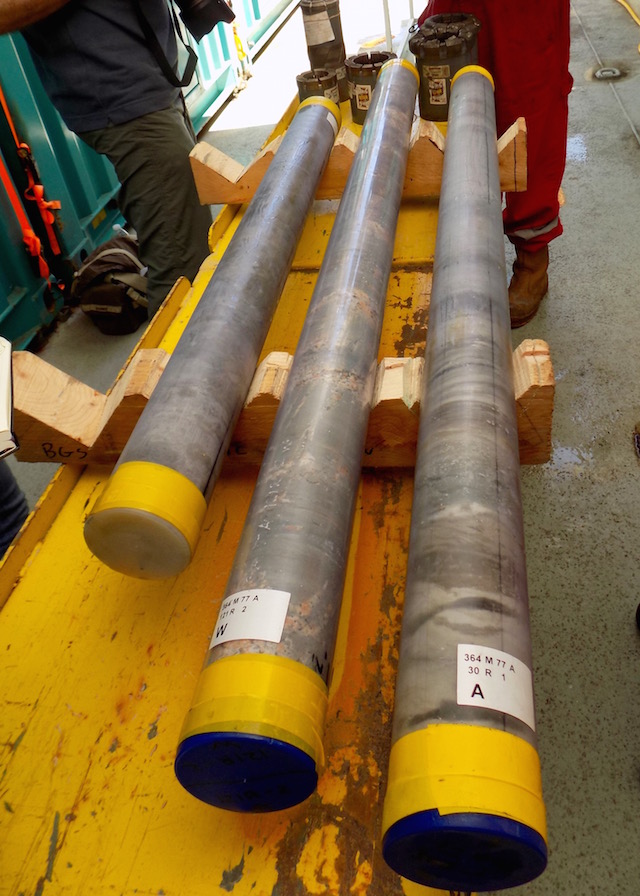 For one thing, the cores on the Liftboat Myrtle are not split in half like they are on the JR. Well, at least not yet. Because the Liftboat Myrtle is not normally a drilling ship, there is not enough space on it for all the lab equipment to do all the core description that needs to be done. So the cores on this expedition are being left intact and are being stored in a special refrigerated container on the deck. When the expedition ends, the cores will be shipped to Bremen to wait for the science party to split them open and start describing them in September.

Here is what that refrigerated, core storage container looks like on the outside (though it is not always infested by men in red coveralls):

The container keeps the cores at 4 degrees Celsius (about 39 degrees Fahrenheit). That is the best temperature to prevent any deterioration that might change the cores before description and sampling can begin.

That is not to say that the scientists aren’t doing any description of the cores while they’re at sea. There is some lab equipment on the Liftboat Myrtle. For example, each core goes through the instrument below, which detects some physical properties of the cores, like density and gamma radiation.

The science party will use this physical property data as well as visual analysis of the outside of each core to mark the changes they see as the cores come from continually deeper and deeper within the crater and begin to do some preliminary interpretation of each core and the story they are telling. This will help them get a head start on the main description and analysis of the cores.

It’s not just what the Chicxulub scientists are doing with the cores that is different from what typically happens on the JR. The cores themselves are different. When I was on the JR during the Louisville Seamount Trail expedition, the cores were all basalt, basalt, and basalt, with occasional breaks for breccia and sediment. This, of course, was not unexpected. On that expedition we were drilling into old volcanoes on oceanic crust, so basalt, basalt, and basalt is what you get. The JOIDES Resolution drills in the deep sea into oceanic crust all the time, so on almost any expedition it is going to get lots and lots  of basalt cores.

There are no basalt cores being drilled during the Chicxulub Impact Crater expedition, though. Instead these are the three main types of cores the scientists have been seeing:

The core on the right that looks like some kind of delicious ice cream (unless I just get that impression because I’m thinking right now about going to the galley and getting a snack) is layers of limestone. Limestone is a sedimentary rock that is made up of fossilized shells of marine animals, particularly the shells of plankton like foraminifera. For a long time, the Chicxulub Crater was basically a bowl in the seafloor, so a lot of shells were able to collect there without being washed away, and eventually these shells consolidating into many layers of limestone that are now coming up as cores.

The middle core above is granite. It’s kind of hard to tell in that photo that you are looking at granite, because that particular core lining has a lot of mud in it that is covering up the rock. So here’s a photo of different Chicxulub Crater cores where you can easily see the granite:

There are granite cores here because this ocean drilling expedition is actually drilling into continental crust. Continental rock is mainly made of granite (somewhere deep underneath you there is probably a bunch of granite, unless you’re reading this in the middle of the ocean). The half of the Chicxulub Crater where the Liftboat Myrtle is drilling is called the continental shelf. It is the part of the continental crust that is covered with relatively shallow sea water and that makes it easy for you to slowly walk from the beach into the ocean and only get one extra centimeter of your body wet every step you take until the water touches your bathing suit and then it’s all over.

That third core up there may be the most exciting stuff (it definitely has the most dramatic story). It is the rock layer that was created by the asteroid impact.  Here’s a closer look at one of those cores:

This type of rock is called breccia. This core contains a chaotic mix of a variety of rock remnants from a variety of places that were all brought together by the catastrophic forces unleashed by the asteroid impact. It included chunks of limestone from the top layers of the seafloor at the impact site as well as chunks of granite from the lower layers of the seafloor.  It also likely has particles from the Chicxulub asteroid, though this asteroid hit the Earth with such force that it probably completely vaporized, so the particles that came directly from the asteroid will likely be microscopic.

But those aren’t the only ingredients in this core’s rock salad. The heat from the impact turned some of the seafloor into melt rock and that is in there too. Also, when the asteroid impacted the crater at speeds that were at least 45,000 miles per hour, the force of it knocked all of the seawater out of the area in and around the impact site. This water traveled away from that impact as big huge tsunamis. Not too long afterwards, though, all the water came crashing back towards the impact site as more big huge tsunamis. The tsunamis coming back to the impact sites were carrying bits of rock and sand from areas away from the impact site. These bits of rock from places like Florida and Texas also likely got mixed into these cores 66 million years ago.

Of course we really won’t know what exactly is in these cores until September, when the science party comes together to split all the cores open and do careful observation, measurement and interpretation of each core. And even then, we won’t know what is in the cores until the science party continues their data analysis and observation of the cores and then come together about a year after the Bremen description party to publish their findings to the world. The scientists told me that already in this expedition they have seen exciting cores with features that were both hoped for and totally surprising, so when those papers start coming out in about a year and half, we all should learn some amazing things from the Chicxulub Crater cores about the asteroid impact that happened 66 million years ago. We’ll just have to be patient.