Oh Fudge!
What’s In a Name?

The deep hole has been drilled, the target horizon was reached. A first evaluation of the cored material tells us that the story is more complicated than initially thought. More detailed sampling and follow-up analyses in home labs are needed to complete this puzzle.

We now are back to tripping pipe because we want to set sail for the next drill site. Back to the Agulhas Plateau! 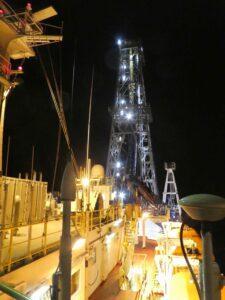 While in transit, our work and first results have to be documented. Reports! Everyone has to write reports, all working groups. Those reports form the credentials of our work. Plenty of other scientists will read them to develop further research plans. First of all, the Science Office of this expedition (both co-chiefs and the expedition program manager) have to read the chapters and provide comments. Then, the reports are returned to the groups, revised and re-read; this rotation will be repeated a few times. Combined, those chapters form a document of the work and first results for each drill site.

The weather gods have been very friendly so far. Especially in the Transkei Basin it has been very warm and sunny. We only had one rainy evening, but more often windy days and some waves of 3- 4 meters in height. During such beautiful weather, the horizon appears extremely well defined, as if someone drew it with a pointed pencil.

But now the weather forecast predicts a strong pressure low. It is supposed to bring wave heights up to 7 meters. We will have to interrupt drilling operations during those conditions. We thus set sail quickly to reach the next drill site and commence operations, at least for part of the sedimentary column. Simultaneously, we monitor the weather forecast in the hope that the pressure low will move southwards.