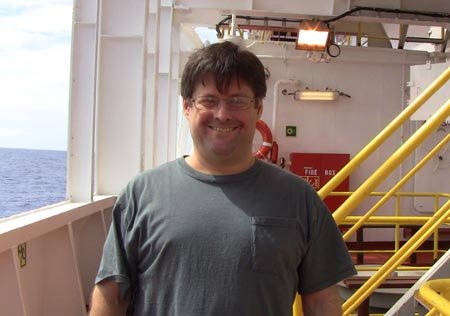 Steven D’Hondt is one of the co-chiefs on Expedition 329. He considers himself an oceanographer but his roots are in geology. Steve grew up in Washington State and by the age of seven, he was collecting rocks. His parents were very supportive of his interests and when he turned 8 years old, they bought him a mineralogy kit. Steve’s parents continued to encourage him by taking him to rock and mineral shows and rock hounding (for amethyst and petrified wood, among other minerals and rocks). Strangely, when he entered college, he intended to major in economics. That lasted until he took a course in introductory geology where his professor talked Steve into taking a crystallography class next. That was it for economics. He earned his undergraduate degree in geology at Stanford and went on to Princeton to earn his PhD. While at Stanford, he worked for the United States Geological Survey (USGS) in the area of paleontology and stratigraphy.

Steve’s research interests focus around the theme of life. He wants to know about what limits life on earth, how living organisms affect the world around them, and what can we learn that will help us understand about the possibility of life on other planets.His interest in geochemistry and past life (paleontology) led him to think about life in the present, so you can now see how Steve made the transition from geology to oceanography.

He finds being a co-chief scientist fun and a privilege. His responsibilities are to make sure the objectives of the expedition are met, but it also allows him to wander through the labs and get a good glimpse of the overall work being conducted. As with all of the scientists on board, Steve has requested samples to conduct his own research, as everyone works together to complete the overall objectives.

In his spare time, Steve likes to spend time with his family (his children are still quite young), and he likes to cook and garden.