Captivating Conversations with the Caption: Part II, by JR Caption Terry Skinner
How does 30,000 feet of drillpipe fit into one ship? 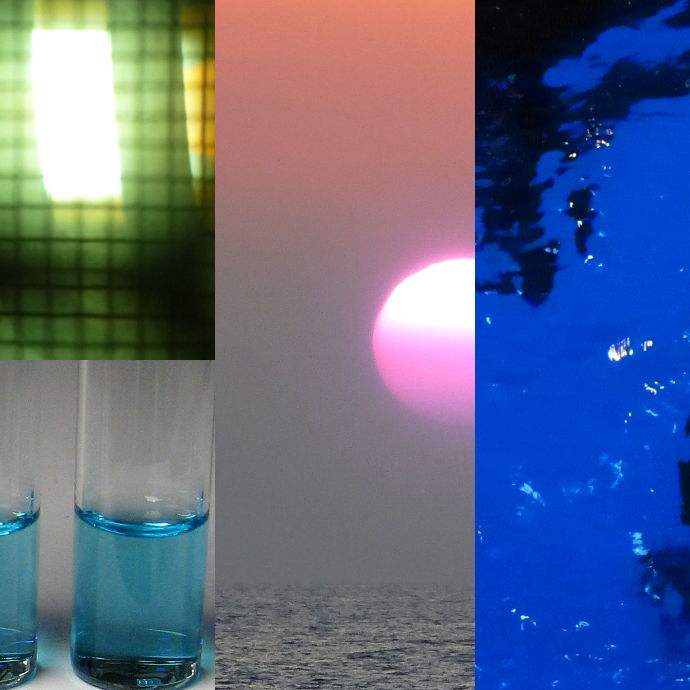 Colors are found everywhere on the JR.

In the upper left you see the fade green gleaming of the AES (atomic emission spectrometer). In this device, material from the core is heated up to several thousand degrees to form a plasma. This plasma emits colored light that’s analysed automatically to determine the kind and amount of different elements in the core material.

The picture in the lower left shows the slightly intensifying blue in a row of test tubes. The color is caused by a chemical called Iron(II,III)hexacyanoferrate(II,III) or simply Prussian Blue (Prussia was the biggest German kingdom, not to be confused with Russia). The intensity of the color tells us the amount of Nitrogene in the water squeezed out of the core material.

On the very right you can see another kind of deep blue, shining out of the moonpool. The moonpool is the hole in the bottom of the ship where the drillpipe is lowered to the sea floor. The beautiful color is caused by the water the light has to go through on its way around the ship. A part of that light is absorbed, another part shattered in all directions, the remaining light is blue.

And finally the deep orange of one of the stunning sunsets that can be seen on the JR almost every day and that always drive scientists out of their labs for a few minutes. The color is due to the shattering of the sunlight’s blue component by oxygen and dust in the atmosphere – that’s what gives the sky its color during the day. During sunset, only the remaining light can be seen, which is orange or red.

Sometimes, under good conditions, if the sun disappeared under the horizon and so did the orange color, one more scattered color can be seen for just a few seconds: the green flash. 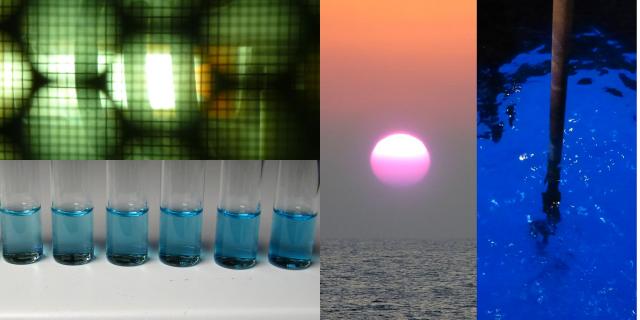