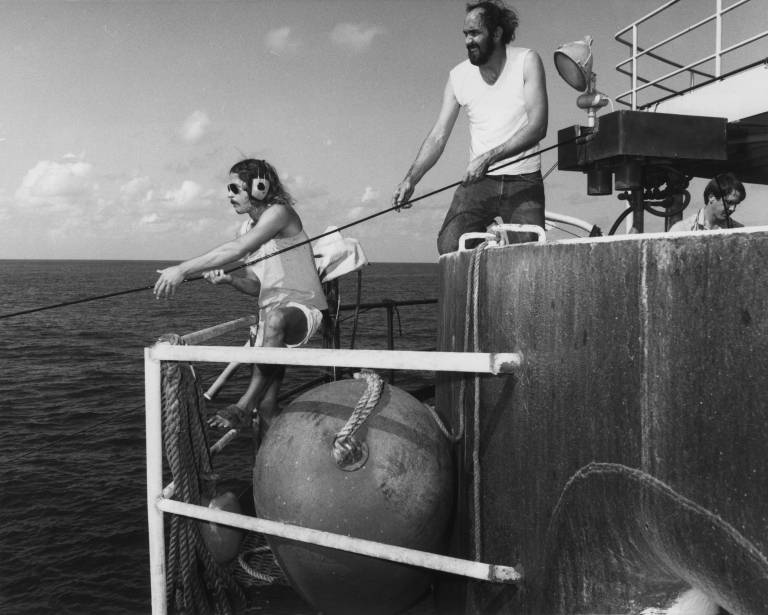 To come on site in DSDP days required the Challenger to conduct seismic surveys and compare those surveys to pre-drilling surveys conducted much earlier by other institutions (See Leslie’s Site Survey Challenge Blog).  The co-chief scientist, or co-chiefs if the site was important, would huddle around the seismic recorder in the Electronics Lab comparing the Challenger record to the site survey record.  When they were happy with the site, they would either telephone or walk over to the Bridge, which was just a few steps away, and let the Captain or mate on watch know it was OK to drop an acoustic beacon.  Then the Bridge would blow the horn and the deck hands would throw a beacon over the side.   We would be lucky to be within a mile of the proposed site.

Then the techs would rush to the fantail to pull in the magnetometer, the hydrophone array, and the air gun.  Not an easy task as the “Maggie” (as the magnetometer was called) and the hydrophone were both on their own 1,000 meter cable and had to be brought in individually using a cable puller, but the coiling of the cable was all hand work.  The cable handler was also used to raise the air gun which weighed several hundred pounds and had to be man-handled to “land” it on the ship.

Once aboard, the Bridge would be notified and, if Captain Clark was at the helm, a Williamson curve (turning almost a complete circle to bring the ship right back on its original track, but in the opposite direction) would be effected and the Challenger would slowly return to where the beacon was tossed.  The ship’s hydrophones would pick up the beacon’s signal and the DP operator would let the Bridge know when the ship was over the beacon.  The Challenger had its thrusters within the hull so there was no deploying of thrusters like the Resolution.

Once the beacon was dropped, the rig floor would begin putting the bottom hole assembly together and soon the site would be officially occupied.

On the Resolution the GPS guides the ship to its site, the thrusters are lowered and the site is occupied.  They don’t even have to toss a beacon, but do — just in case the GPS hiccups.  They have no seismic or magnetic gear to retrieve so, in a way, it is a bit anticlimactic on the Resolution for those of us who sailed and worked on the Challenger.

Photo:  A Tough Pull – Jerry Bode, center, Dennis Graham (with headphones) and Phil Stott, (right) are on the fantail of D/V Glomar Challenger pulling in a hydrophone streamer, part of the ship’s seismic profiling equipment, prior to drilling at Site 415 on Leg 50 of the Deep Sea Drilling Project in the Atlantic Ocean off Morocco. The hydrophone array, some 300 feet long, at the end of a 1,000-foot cable had to be retrieved before the vessel could stop and drilling and coring could start. The seismic profiling equipment, which uses sound waves as an energy source, looks at the structure of the sediment below the sea floor and records the echos electronically on a recorder in the Electronics Lab aboard ship.  Credit:  Deep Sea Drilling Program, Scripps Institution of Oceanography Archives.