Communications from the sea – before personal Wi-Fi 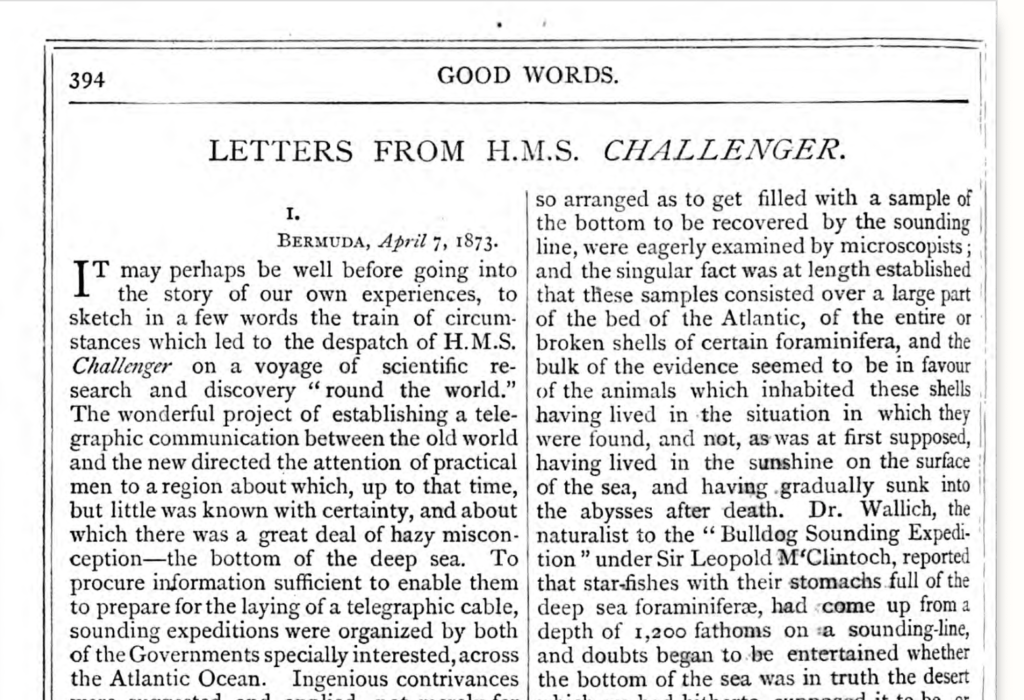 We are fortunate to have access to communications technology on JOIDES Resolution for Expedition 390 that allows us to share email, Zoom sessions, social media postings, blog posts, and more. These tools provide everyone the opportunity to follow our expedition while we are on the water and collect cores along the South Atlantic Transect. But there was a time before satellite connections and email allowed for an exchange between the ship and shore. Here, as we continue to celebrate the 150th anniversary of the H.M.S. Challenger expedition, we provide a little insight into how communications from ships at sea took place during various times of ocean exploration.

The challenges of communications from Challenger

When H.M.S. Challenger left port in 1872, there were no computers on board or satellites to connect with to send or receive email messages. Telegraph cables were emerging and being laid across the ocean floor for messages to be sent to the other side of the Atlantic Ocean, but this was not an option for ships on the water. At that time, handwritten letters were the primary form of communication and the only way to share information across the miles.

This “snail mail” version of communicating for Challenger worked very well, thanks to Great Britain’s global reach via ships on the ocean. Since Challenger docked at ports frequented by British ships, letters and news stories could be exchanged.

Charles Wyville Thomson, the civilian scientific director on board Challenger, was well-aware of the importance of communicating their science and adventures. Wyville Thomson frequently wrote reports and articles during the three-year expedition, including 15 articles published in the monthly evangelical British periodical Good Words. Each article is full of scientific detail and includes sketches, not credited but most likely completed by expedition artist and secretary to Thomson, John Wild.

Additional Challenger scientists, sailors and officers wrote letters and non-technical books for the general public that resulted in widespread attention across multiple audiences (W.J.J. Spry’s The Cruise of Her Majesty’s Ship “Challenger”, Henry Moseley’s Notes by a Naturalist on the “Challenger”, etc.).

Fast-forward to 1968, the time when the Deep Sea Drilling Project vessel Glomar Challenger began exploring the ocean through scientific ocean drilling. Dr. Suzanne OConnell (Wesleyan University) sailed on two legs of Glomar Challenger – Leg 74 and Leg 96. Dr. Pamela Kempton (Kansas State University and currently on Expedition 390) sailed on Leg 83. Both scientists recall there was no email or internet, that those on board were essentially isolated from freely communicating back home. Scientists received a printout once a day with news updates. There was also a shortwave radio operator on board. One could sign up for a 15-minute time slot for a conversation that had to be relayed through the operator and a telephone call. The conversation could be overheard easily by others on the ship. One always had to say “over” at the end of the sentence, which caused a great delay in the conversation.

Despite the communication isolation from their family and friends, the scientists did generate a sense of community among themselves. For example, Dr. Kempton shared that her Glomar Challenger expeditions sailed over Christmas. One way they celebrated the holiday on the ship was to go around and make presents for each other out of whatever they could find on board.

Drs. OConnell and Kempton also have memories of how communications on JOIDES Resolution were different in the early years. Dr. OConnell recalls on Leg 113 that communication exchanges between ship and shore were only done once a week, on Saturday evenings. Dr. Kempton shared that on her later JR expeditions there were email bursts twice a day, but there was a character limit to what you could type. One would have to pay a fee if they exceeded the limit, and no files could be sent as attachments. She also remembers that across all of the expeditions she has sailed (this is her fourth one with DSDP/ODP/IODP), communications have improved.

So which communications and technological tools will we take advantage of to share our adventures on Expedition 390? Stay tuned for a second blog post that discusses the current methods of communicating to/from JOIDES Resolution.

*Parts of this blog post were adapted from L. Guertin’s post on the AGU blog GeoEd Trek, The science communications from H.M.S. Challenger were “Good Words” and more (26 March, 2022), supplemented with information from personal communications with scientists that have sailed on Glomar Challenger and JOIDES Resolution (Dr. Suzanne OConnell, Dr. Pamela Kempton).