Core, Flowing, Video 7 in the #EXP390Story series, describes the core flow process and shows how the drilling team, technicians, and scientists all work together to achieve a common goal: drilling, retrieving, processing, and analyzing sediment and rock cores.

The numbers on the video correspond to the explanations below.

1 The JOIDES Resolution is a scientific ocean drill ship. It drills deep into the seafloor to retrieve cylinders of sediment and rocks called cores. Scientists use these cores to learn about Earth in the past, including past climate, changes in the physical Earth, and geohazards such as earthquakes.

2 The “doghouse” is where the drillers operate the drilling equipment.

3 “Roughnecks” work on the rig floor and do the physically demanding work of moving the parts of the drill pipe and the core themselves. (“Iron roughneck” is also the name of the mechanic device that connects the pieces of drill string.) The core barrel arrives on the rig floor. Inside is the thick plastic core liner filled with sediment or rock.

4 On the catwalk, technicians receive the 9.5-meter cores, cut them into manageable 1.5-meter lengths, cap them, and curate them. They also facilitate all aspects of the science teams’ work in the labs and beyond. All the technicians are also trained scientists.

5 It is cold deep below the seafloor. Sediment cores stay in this rack until they reach ambient temperature, which can take several hours. This wait is so the physical properties, which can appear different at colder temperatures, do not change further after measuring.

6 Cores are cut into two halves: an archive half and a working half. The archive half is described and then stored for posterity. The working half is used for samples for scientific analysis.

7 The core lab has all sorts of machines. These are some of them.

A TK04: Measures thermal conductivity—how well a sample can conduct heat—in sediment and crust, which is a physical property dependent on chemical composition, porosity, density, structure, and fabric of the material. Heat flow is used to estimate the age of ocean crust and help understand fluid circulation processes within the seafloor.

B The SHMSL: measures light reflectance and magnetic susceptibility

C The NGR measures natural gamma radiation emissions. Gamma rays are emitted during decay of uranium, thorium, and potassium isotopes found mainly in clay minerals in sediment. These measurements are used for correlation between cores, holes, and wireline log data in addition to providing insight into sediment composition and chemical processes at the seafloor.

D The SHIL: takes a detailed image in RGB values

8 The science team is always busy, too, and different kinds of scientists work in a variety of ways that we’ll explore in upcoming videos.

9 Finally, the cores are carefully wrapped, cased, boxed, and stored in the refrigerated hold. Our cores will be taken to and kept in the core repository in Bremen, Germany. The working half will be further sampled on shore by our team. Scientists around the world who wish to use this sediment will be able to request it after our one-year moratorium has passed. The archive half will remain pristine and untouched forevermore.

10The JOIDES Resolution never sleeps. Science operations continue 24 hours a day, and every person onboard works a 12-hour day, 7 days a week, for the entire 8-week expedition. The various teams on the ship work in concert to achieve our goals, and all are equally important, from the crew including the drilling team, to the technicians, stewards, and the scientists themselves. Revealing Earth’s secrets from the sediment and rocks below the seafloor is truly an international team effort.

These diagrams show our core flow process in more detail for both sediment and basement rock. 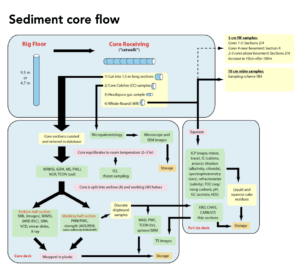 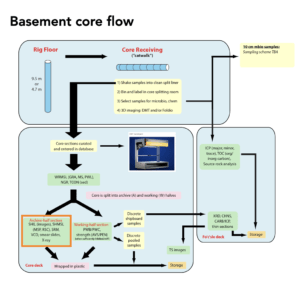