Crazy Cool Core from Asut Tesoru, or How Rocks did in the Hump Day Party 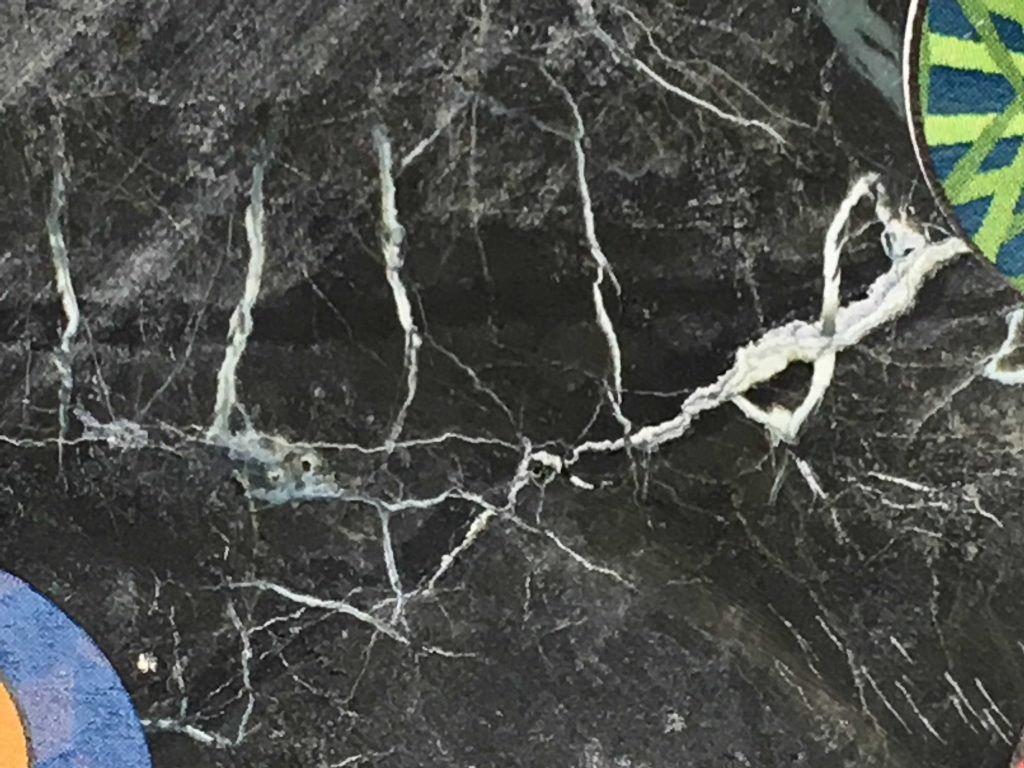 We are (at last) in the second official “lull” in coring, as they widen a 110 m deep hole at the top of Asut Tesoru seamount for casing and prep for downhole instrumentation.  The operational strategy for doing it this time was very different (we cored the hole they were to case – which means we pulled a bunch of stuff out, making more space for reaming and setting in the casing sheaths), and the hole itself was very (almost too) cooperative toward the end, as we got crappy yields on RCB cores, but made a bunch of quick headway in drilling down.  But the yields we got on those RCB runs had their impact! 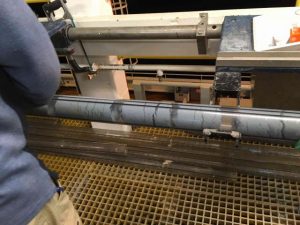 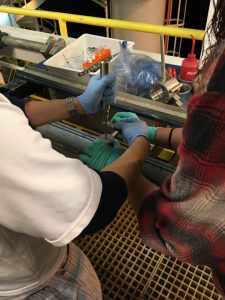 Before we got to rocks, however, we got LOTS of blue mud – and we got it in a screaming hurry!  The summit water depths were less than 1300 meters, which means that the core catcher transits top-to-bottom-to-top again in about 40-odd minutes.  For two solid days, every single core trip at the summit brought up a nearly full 4.6 meter core of pale blue, very smelly, and very VERY gassy serpentinite muds (and these were REAL mud this time, not a a quasi-solid as was the case at Yinazao and lower on Asut Tesoru’s flanks).  For Geochemistry, where we wait for an hour for an new porewater sample to chill down before squeezing it, and where a single squeeze can take several hours, the pace and giddy success we had in core returns resulted in massive backlogs of sections to squeeze and basically no downtime for twelve solid hours – I crawled into bed exhausted with sore feet and ankles from “riding” our core squeezers to be as time efficient as possible.   Our microbiologists, were in their glory, however – all that gas (some of it hydrogen and some of it methane!) pointed to microbial life (maybe…) in these muds, so they were frantically separating their dedicated core segments, sampling the gases directly and via the muds, and securing their samples to go home in -80°C freezers.  And they were doing all of this in their end of the Geochemistry laboratory, so the place was truly hopping! 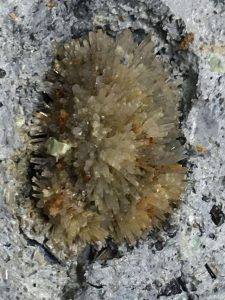 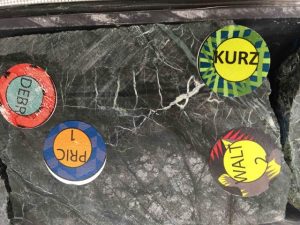 On Monday they hit some hard stuff and had to shift to RCB (rotary core barrel) drilling, which we knew would reduce recovery markedly, and it did – so we got caught up.  Monday was also “Hump Day”, the official halfway point of the cruise, and per tradition a Hump Day party was set.  I re-arranged my sleep schedule a little so I could attend, recalling it from my previous Expedition as a fun (if sorta dorky) experience.  My getting out of bed for it aligned with a call for Core on Deck! – which I figured would pull a few people out – but when I got there, it was only a couple folks and some loud-ish dance music – very sad!

What happened to the Hump Day Party?  Well, apparently rocks happened – not the little pebbles and cobbles we’d been getting, but some big, core-wide chunks of rock that only an XCB or RCB bit could cut out and bring up, albeit in very modest quantities.  Much fresher and harder rocks, with fresh pyroxenes and (hopefully) olivines in them -and some weird rocks that for sure WEREN’T serpentinite or ultramafic (and we’re still trying to to figure those out now…).  These are the rocks that over half the science team was looking for – so the first calls kept the Day Shift folks engaged on the Core Deck, and the later ones pulled in the Night Shift folks, which left nearly no one to Hump Day party in the Rec Room.   Other, more modest recognitions of the date (including an old Geico commercial of a chatty camel in the office) were made, however, and a barbecue lunch was served on the bow.  So, officially, we are on the downhill end of our adventure, if only just. 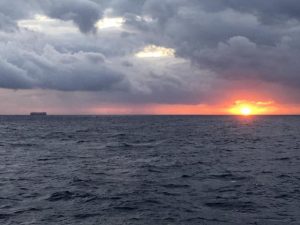 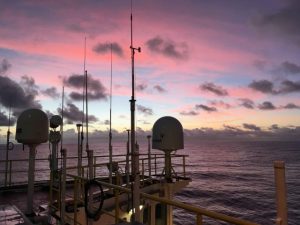 While the weather has been a bit less windy at Asut Tesoru, the days have been more overcast.  This has led to some dramatic sunrises that don’t always involve an appearance by the Sun.   We’re all keeping our fingers crossed for success in casing, so we can get onto our next seamount target  – and maybe book a few “free” days after our committed drilling plan is done, to return to RCB for rocks some more.