Seismic data in time but what is the depth?
Evidence is your anchor out at sea! 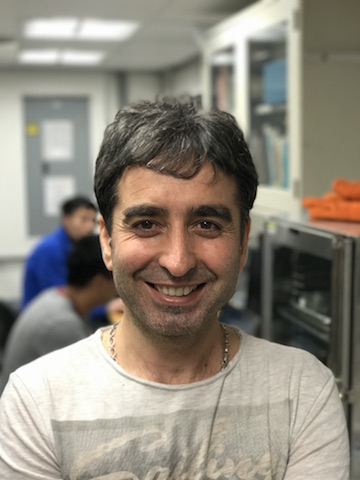 Today I had the chance to sit down with Deniz Cukur who is sailing as a Petrophysics Specialist with the JOIDES Resolution. Here is my interview with him about his career and experience as a Petrophysicists!

Amanda: How many times have you sailed on a research vessel?

Deniz: On research vessels with the IODP cruise I have sailed twice. Before this, I sailed with the Chikyu in 2009; we investigated the sedimentary evolution of Kumano Forearc Basin off shore Japan. That was the first riser drilling expedition with IODP so that was really nice to be a part of. On theJR it is my first time sailing. Of course, I have also sailed with other marine service vessels from Germany and South Korea. So basically, I sail twice a year.

Amanda: That is a lot of time on the water, how many months would you say you have lived on a ship in total?

Deniz: At least 6 months, well each expedition is at least 45 days so in total at least a year actually.

Amanda: How do you like living at sea? – the highlights and low lights.

Deniz: There are a lot of things, so many things that I like about it. One of the highlights is getting to meet with other scientists, like international scientists. Getting some exciting results. I am very curious about what is going on beneath the ocean floor. Seeing the sunsets and sunrise over the water in the morning. Actually, I do not have anything that I do not like about the ship life, really, I enjoy everything.

Amanda: Is there anything you miss?

Deniz: My wife, sure, yah I just miss my wife that is all. And the food is awesome, the people are awesome, the technicians, everyone is so nice. I really like the way they move things along. For instance, you give them your clothes and they come back ironed. It is pretty cool, it makes it very comfortable. Also the showers on the ship, the water pressure and temperature is perfect, and always hot.

Amanda: What is your main research objective in this Expedition.

Amanda: Can you explain to me what a graben is?

Deniz: The crusts stretches and a layer of sediment sinks and that is where the water comes in. So the South China Sea, what we know about it is that it was a shallow sea for a long time. We can tell this from the forams, the microfossils, that we find in the sediment layers. Then the sea floor spreading continued and it became a deep sea floor environment and then we can tell this because some of the layers contain marine organisms that live in deep sea levels. This is the evidence. We know a lot about these organisms, some live in warm temperature, some live in shallow warm water and they leave a record. From the marine record we know that the sea level 20,000 years ago was 120 meters lower than it is in our present day. Much of the continental shelf was exposed and the rivers were flowing to the sea. Since then we can sea that the sea level rose again to the current sea level.

Amanda:Since you have been in the field for a while, you have a good perspective on this, why we care about this geologic research? How does it help humanity?

Deniz: There are still so many questions that we have not answered about the oceans, about the development of the margins. Also we could potentially project some estimates about the tsunamis and future climate changes. Based on data we collect we can estimate the potential height of the tsunamis or typical size of earthquakes and their rates of reacurrance. You can see some indications from the data we collected. For geo-hazards, people are working on measuring underwater landslides and then meeting with cities that live along the water and advising them on how to build in a certain area.

Deniz: My favorite thing, I would have to say is exploring new things. We go to sea or lakes and we acquire data, and when we look at and interpret our data we see something new and exciting. It is one of the best parts of our research. And then we present and publish our results to the world. So that everyone is able to see. There are a lot of things beneath the sea that have not been explored. They are waiting to be explored. That is one of the best things.

The second thing is scientific meetings. Meeting with colleagues in different places of the world. You work hard in the lab or in an expedition, reviewing data and this is a kind of break. You get to share ideas and get peoples perspectives when you present. People will comment and you will get more insights on your research. When I go to AGU I look at the poster presentations and I can skim a lot of ideas that help me better develop my research.

Amanda: What advice would you give a young scientist?

Deniz: Well, in my case I did not know that I would really like this career until after I got my doctorate in it. But I got my graduate degree and I went on an expedition on the Chikyu, with IODP, There I met a man who connected me with my first position. I then got to live in Germany and now I live in South Korea. I have been the South Korean representative for the Science Evolution Panel Member and it has been a great honor to serve in this position. So my advice to young scientists is to take the opportunities.  Take chances, sometimes you have to make decisions and these decisions will change your life.