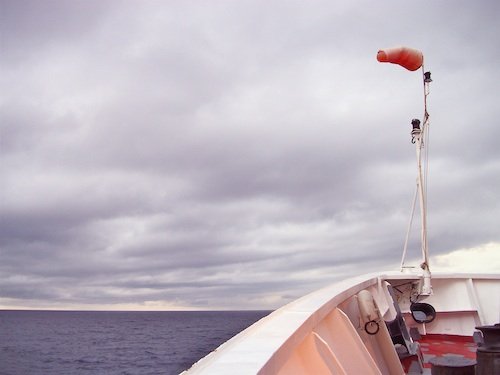 Where are we now?
Off the western coast of Costa Rica, in the Pacific Ocean. Our coordinates are N 8°36 min, W 84°4 min. Storm clouds all around, and some rain this morning…cleared up to a pretty nice day! The air temperature is 28 °C (82 °F) and the water temperature is 26 °C.

Scientists at Work
Some Paleontologists study dinosaurs that roamed the ancient earth and some study tiny organisms no bigger than a grain of salt that lived in ancient oceans. In the Paleontology Lab on the JR, Dr. Alan Baxter studies nannofossils found in the sediments at the bottom of the ocean. They are so small that thousands of them could fit in the space of a grain of salt!  These tiny nannofossils come from phytoplankton that lived in ancient seas.  Phytoplankton are photosynthetic organisms (algae) that use sunlight and carbon dioxide in ocean water or fresh water as their “food” and are the base of the food web. They account for about half of all the photosynthesis on Earth!

They make a soccer ball-shaped shell called a coccosphere that is made of calcium carbonate.  When the phytoplankton dies, it drifts to the ocean floor where the “soccer ball” falls apart into individual platelets that are buried in the sediments.

These individual platelets become fossilized as layer upon layer of sediments rain down on them, and paleontologists can use them to find out about the climate at the time when these organisms lived.

Another important organism that has lived in the ocean for millions of years is called a foraminifera, or foram, for short. They are a kind of microscopic amoeba-like psuedopod that makes a shell and lives in the sea. Some of them float around at different depths and are called “planktonic.” More common are forams that  live on the ocean floor and are called “benthic.” Dr. Baxter explained that scientists can use these tiny fossils to help them determine the ancient climate in a sediment core using the isotopes of oxygen in their shells. Also, because some species of forams lived at certain depths or certain temperatures, scientists can tell a great deal about those early oceans by studying these tiny fossils imbedded in the ocean floor. The earliest forams date back to the Cambrian Period, over 500 million years ago!

Camp Boss Taylor McKirdy runs a tight ship! Along with Assistant Robert Tungol, Assistant Chefs Efren Adona and Eric Tubadoza, and a whole crew of stewards, cooks, and bakers, they keep everyone fed and happy four times a day with breakfast, lunch, and dinner served at every meal to accommodate the different shifts.

About six to eight weeks in advance of an expedition, they start sending food supplies to the starting port, and average about $180,000 to $200,000 worth of food for a nine-week expedition.
Mr. McKirdy agreed to take me on a tour of the ship’s food supplies, so we started in the Cold Room, where the temperature is kept between 1 and 5 °C (that’s close to freezing).  This is where they keep the veggies and cheese, fruit and some milk.

We use “Carton milk” that has been pasteurized and irradiated so as to be bacteria free.  This kind of milk can stay on the shelves for months without refrigeration!  They put it into the fridge to cool it down before we use it and it tastes just like normal milk.

Next, we went into the Colder Room at -18 – -20 °C (That’s REALLY cold! Below freezing!) for the foods that must be kept frozen until use, like meats, fish, and frozen bags of vegetables.  Lastly, we went up to the “Iron Beach” on the very top deck of the ship where people like to go and get some sun when not on shift.

Two more -18 °C freezers sit up there, also filled with meat, fish, and veggies.  Quite a feast!

From the subduction zone, west of Costa Rica…