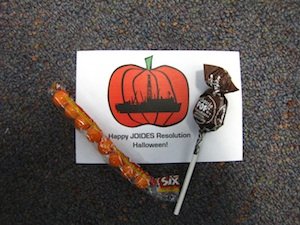 Where are we now?
Off the western coast of Costa Rica, in the Pacific Ocean.  Our coordinates are N 8o36 min, W 84o4 min. It has been cloudy today, but not raining…beautiful weather for Halloween!

Scientists at Work
This morning one of the scientists let me look at a video taken with a camera attached to a microscope of a live foraminifera, or foram, feeding on algae with its pseudopods out.  Foraminifera are a type of protozoa that live in the ocean and form a shell, also called a test. The way this shell forms can tell scientists about the conditions in the ocean when the organism was living.

Half of the cups are done!

The wonderful drill crew attached as many mesh bags full of cups as they could to the pipe going down to the bottom of the sea.  Since we are on the upper plate of the subduction zone at this site, the water depth is only about 500 meters.  I was worried that it might not be enough pressure to shrink the Styrofoam cups and heads.

By the way, the pressure increases by 1 atmosphere every 10 meters of depth, so it is still 50 times the pressure that you have on land!  Should be enough…

And the cup that got the most attention from the scientists:

It says, “So this is what a subduction zone looks like.”

I had to wash them all, and the bags, because they were in seawater full of little organisms like plankton that had gotten into all of the nooks and crannies in the cups, and they started to smell bad right away. Yuck.

Halloween tonight! The cafeteria was all decorated…

The kitchen staff has REALLY gone out of their way to make a fun and festive Halloween meal for all of the shifts of scientists.  We had spooky desserts, carvings, and foods…Incredible! All of the following are edible!

From the Pacific Ocean, west of Costa Rica, on a dark and scary night…