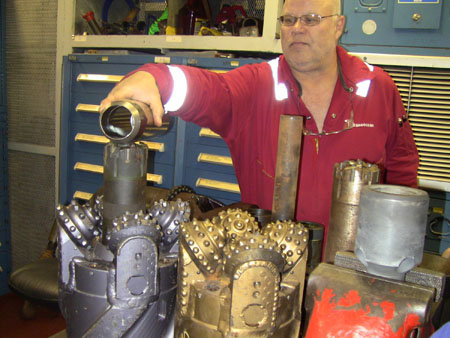 The weather today is starting off better than yesterday; there are stratocumulus clouds across the sky with some patches of blue. The ocean water is very calm, as it has been for several days now.

Today we are going to be rotary core drilling into the basalt basement rock. Up to this point, we have been mostly interested in collecting sediments, after all the focus of the expedition is microbiology. Rather than rotary coring, the drilling crew has been using piston corers to collect the sediments. With a piston corer a tube, basically, is shot out of the end of the drill pipe and into the sediments. Rotary coring is used when we must penetrate hard material, such as rock. Cutting teeth are rotated against the hard rock and a core is cut out of the rock. In order to do this, all of the drill string has to be pulled up (this was done yesterday) so that the cutting head can be installed and then lowered once again.