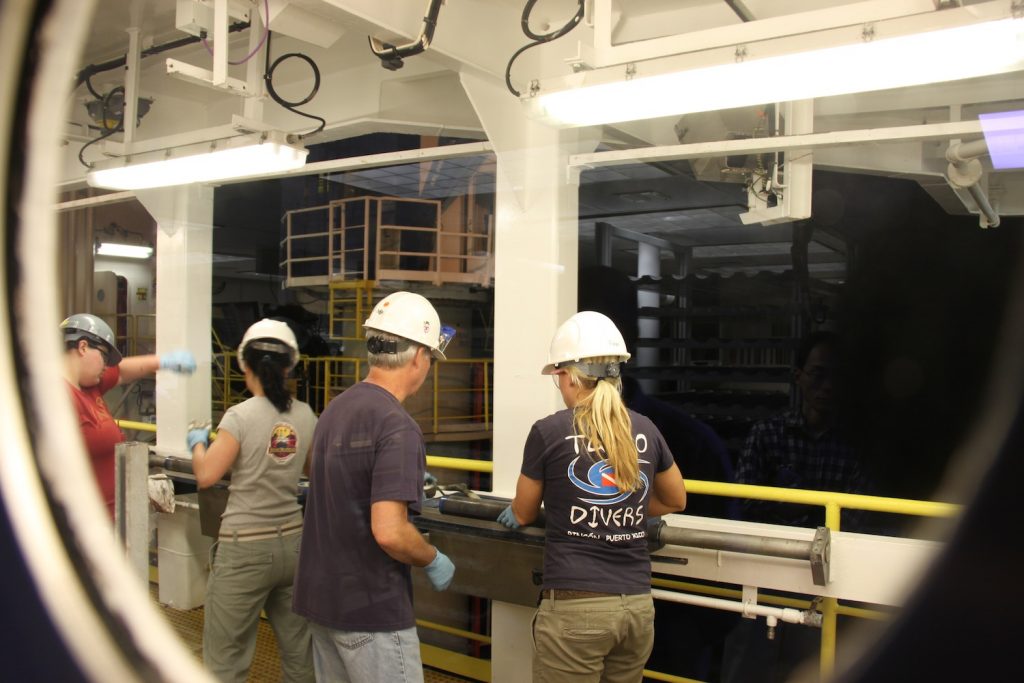 A number of preliminary things must be accomplished before cores are actually retrieved. There are two options when ocean drilling, either to return to an existing drill hole that was created on an earlier expedition or to drill a new hole in the seafloor. For Expedition 340 we are drilling new holes in order to sample a timeframe of the geologic history not yet explored in this area.  This decision is made long before the Expedition as part of the proposal process. Next the 12 thrusters for the dynamic positioning system (DPS) are engaged, a drill string assembled and the drill pipe assembled.

The time at each sampling location can be several days. For example at our first sampling site there were many challenges to retrieve cores due to the composition of the rock below the seafloor. Eventually after many attempts to retrieve meaningful cores we left the hole and moved to the next sampling site. At this 2nd site we were able to retrieve many cores with good recovery rates until the integrity of the hole changed– the hole began to collapse. However, the next hole was very fruitful for core retrieval so much so that technicians and scientists have been working around the clock to characterize and archive the core sections. We remained on station after coring today in order to Log the drill hole. After the cores have been retrieved from the seafloor, the bored hole is analyzed by the logging technicians. They deploy instruments using the moon pool to characterize the drill hole. Look for more on this in later posts. Onward to the next sampling site soon… this is ocean drilling ‘science in search of earth’s secrets’

Thanks to John Beck and Bill Crawford for sharing this picture