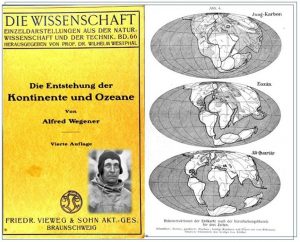 The model of plates tectonic will the framework of the scientists.

But the story of this theory was beginning early in the twentieth century! In drawing the first maps of the New World, cartographers were struck by additional forms of coastal contours on both sides of the Atlantic: the contours overlap like pieces of a puzzle!

Around 1915, Alfred Wegener, a climatologist and astronomer, will present the idea of ??continental drift, which would have formed some 200 million years a single super-continent, Pangea, surrounded by a super-ocean, Panthalassa.

Up to you to play explorers !

see below the first enigma for Hess Deep Crust Expedition … answer by a comment !