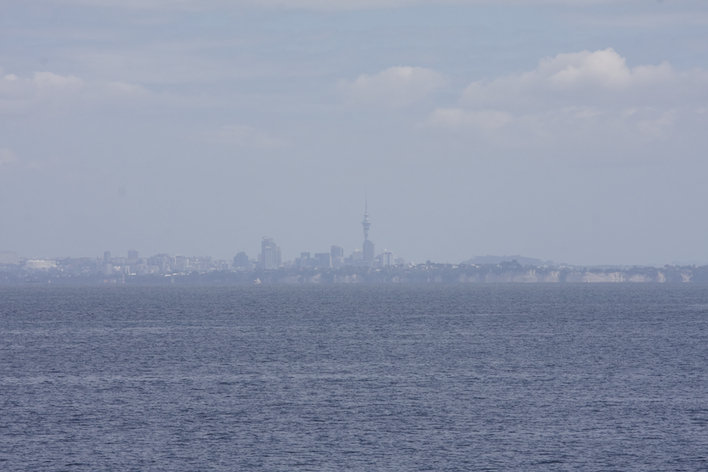 Wow, the final week and a half of this cruise went by super quick.  We sampled one more seamount and then it took three days to get back to port.  We arrived back in Auckland about 4 pm today, you can see the first glimpses of the city in the image at the top of this blog

Expedition 330 sampled 5 seamounts with six boreholes and thousands of meters of drill core recovered.  I personally collected 62 samples from 4 seamounts (one seamount was barely sampled, so i skipped that one), started 260 culture experiments and ten stable isotope addition experiments (these are covered in my earlier blogs).  I feel that I covered all sampling objectives I had, and am pleased with the outcome of this cruise.  I’ll definitely be busy for the next few years.  Further, this was an excellent learning opportunity- it’s rare to have a ship full of geologists at your disposal, willing to explain concepts and data to you as readily as the scientists on board during Expedition 330 were.  The ship’s crew was outstanding, and the galley and support staff were all excellent as well.  For any scientists out there considering joining an IODP cruise, I highly recommend it.  Two months at sea may be a challenge, but it is well worth it in the end, and there is no other way to sample the deep subsurface ocean with such excellent results.

I enjoyed sharing my experiences with you, and I hope that this blog has educated those who read it, and perhaps inspired some people to consider a future in microbiology or oceanography.  Below you see the most recent cruise track as pictured on the ship’s computer (it’s showing on a TV in the galley).  Notice that we’re in port- hooray!  Now it’s off to drinks with the scientists and crew, a fantastic way to end a wonderful cruise.

I’ll point out for those interested in future subsurface microbiology work that Expedition 336, which starts in fall 2011, has a heavy microbiology component and there are sure to be interesting scientists keeping blogs during that expedition.  It’s formally titled "Mid-Atlantic Ridge Microbiology" and the two co-chiefs are Katrina Edwards (my boss) and Wolfgang Bach (a super cool geologist from Germany)- stay tuned!

Finally, I would like to thank Anthony Koppers, Toshi Yamazaki and Joerg Geldmacher, the co-chiefs and staff scientists for Expedition 330.  They chose me to join this cruise and it has been an overwhelmingly positive experience- thanks for having me!