From Planning to Reality – II 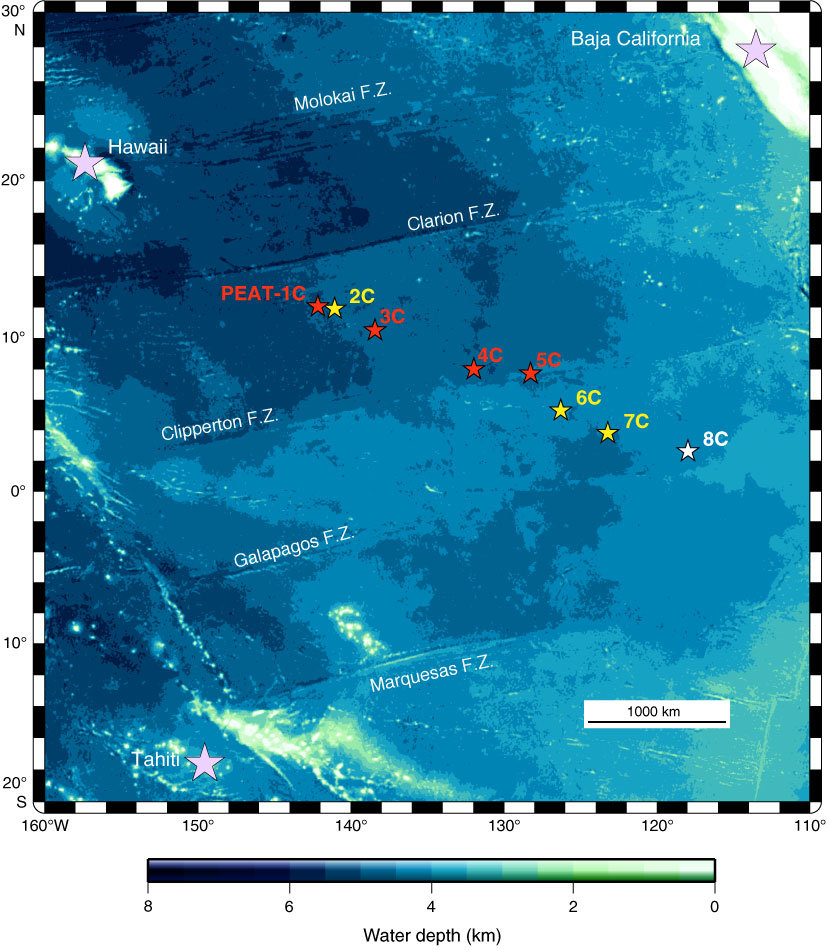 From Planning to Reality Continued…   One needs to spend a lot of research time to then figure out the best possible strategy, and eventually the best possible location, to answer the questions we came up with; and the next couple of years were spent with detailed reconstructions of plate tectonic movements and water depths.

For the last 40 million years or so, the entire Pacific plate has been moving towards the north-west, at a speed of a few centimetres per year, and moving towards the north at a rate of about 2.5 degrees latitude per 10 million years (you can get an indication of that from the orientation of the different Hawaiian islands, that were effectively generated by a process similar to a bunsen burner sitting beneath the Pacific plate while it moves along to the north-west).

A Good and Careful Job

This detailed formulation of research strategy and site planning requires a lot of time, but eventually our first “proposal” was submitted to IODP in April 2001. Effectively, all these drilling proposals (and there are more than 100 in the system right now!) compete for ship time, and there are only less than a dozen or so expeditions per year, so one needs to do a good and careful job!

After the proposal is submitted, the “Science Steering and Evaluation Panel” assigns several expert scientists to assess how well the proposal meets the overall goals of IODP, and how individual scientific aspects can be improved. In many ways, this panel acts as a “nurturing” panel, trying to get the best possible strategy out of a proposal. This process is iterative, and can take a year or more to completion, with constant suggestions and responses flowing back and forth between the panel and the proponents.

Once it is deemed fit for further assessment, this panel then sends the proposal out for external review by yet another group of scientists outside the panel structure. Eventually, the refined and improved proposals get sent to the next panel higher up, which actually ranks proposals against each other, and picks the best ones for scheduling.

And did I mention?

Oh, and did I mention that each drilling proposal also requires a detailed site survey to assess, for example, how deep and thick the sediments are at each drill site, and whether it is safe to drill there?

This requires the use of other survey ships, and the proponents have to write more detailed justifications and proposals to get funding for these expensive surveys. We came out here during March and April 2006 (almost exactly three years ago!) on a six week long voyage onboard the Roger Revelle to use seismic equipment to image between the seafloor and the basaltic bed rock.

The Right Ocean at the Right Time

Once a drilling proposal is ranked highly, and moves into the pool of projects ready for coring, it can then take time again for the drill ship to be in the right ocean during the right time of the year (weather!) and that is where we are right now!

For me, one of the most amazing things is to see how this detailed and long planning process moves along from the first idea in 2001, to the first proposal in 2003 to actually being on the ship in 2009, and the excitement we get when we compare our predictions with reality.

In our case, the predictions have on the whole been very much confirmed by reality, but as always, we have also encountered a large number of truely exciting findings that we did not anticipate! For example, we discovered variations in the acidity of the oceans at different times, and with different amplitudes, from what we knew before.

So, stay tuned, and next time I’ll give you more impressions of what it is like to co-ordinate all the hard work of several dozen scientists and technicians! Right now, there is more CORE ON DECK!