Sorting Data!
Outline of A Scientist’s (me…) Day on Shift 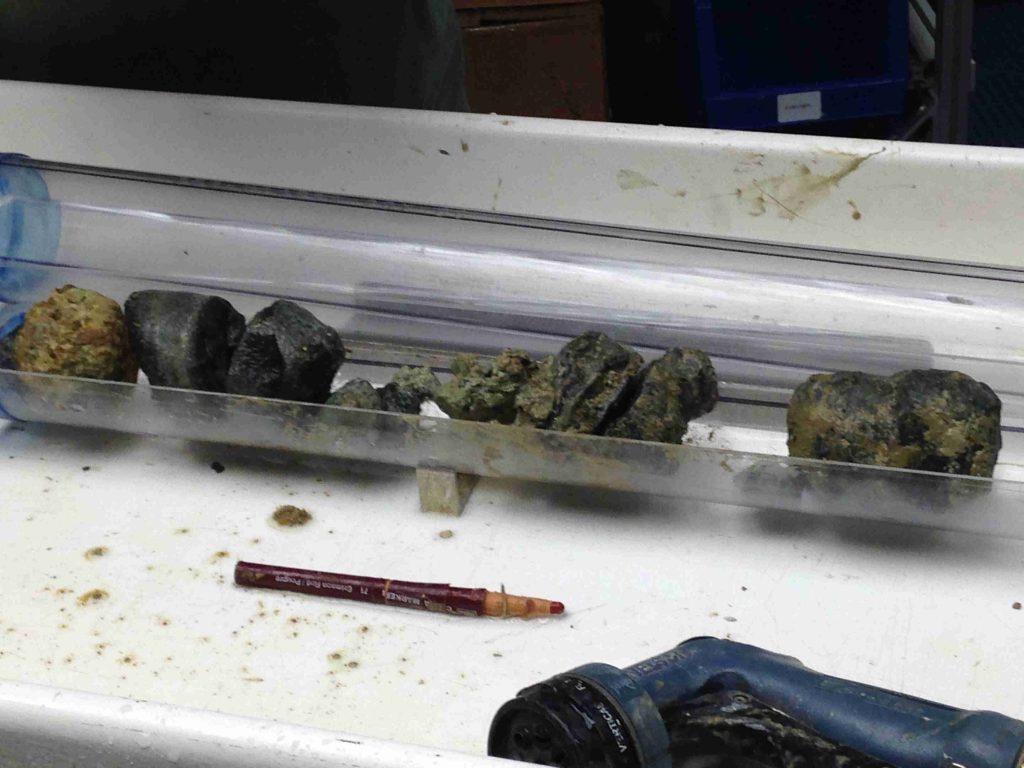 So, why is it such big “news” that we drilled into boninite (that’s them, in the teaser pic!), aside from the truth-in-advertising thing, that the Cruise Prospectus said we were going to find it?

Boninite is a volcanic rock that geologist don’t get to see very often because it only seems to form on the seafloor. Like almost all volcanic rocks, boninites form when the Earth’s mantle melts, and like all the volcanic rocks geologists find around subduction zones, boninite melts happen when the mantle gets “wet” – specifically, after water an

d other fluids are wrung out of the subducting plate as it descends into the Earth, heating up and “drying out” as it does. These fluids are actually dissolved into the mantle rock in nearly the same way that salt dissolves into water, and just like salt water as compared to tap water, the properties of this newly “wet” mantle change, giving it overall a lower melting temperature so that it’s easier to melt and make a magma. What is peculiar about boninites is that the melting is occurring shallow in the mantle where past melting events have sucked all the melt-able stuff out already. The rock name geologists give most of the rocks in this part of the mantle is harzburgite (after a classic locality in the Harz mountains of Germany): it’s made mostly of two minerals, olivine (green) and enstatite (bronze colored), both of which melt at very high temperatures. So any rock made of these minerals is very hard to melt – it has to get really hot, or really “wet” or (most likely) both. So boninites are really hot melts, much hotter than we see in subduction zones today, and they’re really “wet” melts, with a lot of dissolved fluids in them that make them very glassy – a lot like obsidian from on-land volcanoes – when they erupt. The only “place” in the space-time of the Earth where you can make these kinds of lavas are when subduction zones begin – and where boninites have been found before in this part of the world are in the 50+ Ma old rocks of the Bonin Islands and Guam, which date to the very beginning of the Izu-Bonin-Mariana subduction system. So, discovering boninite means we’ve found the rocks from the very beginnings of this subduction zone – one of our key expedition goals!

Now, the other place on the Earth where we find rocks that look like boninites are in an unusual grouping of rocks that are found in the middles of mountain ranges all over the world – an association of rocks that geologists call Ophiolites. Some of the key scientific questions that Leg 352 is trying to address relate to what ophiolites may actually be, so I’ll come back in a later entry to talk about these some, and about the community of geoscientists who work on ophiolites – who are not the same community of scientists who work on subduction zones.