Getting Close to the Cores

A Better Look at the Cores
The Thin Blue Line 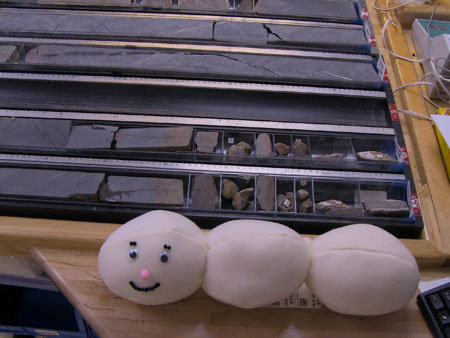 The rock cores are coming! Most of the cores that have been brought up from the seafloor so far have been of soft sediments. This hole is being drilled into hard rock so the cores are noticeably different. The scientists cut the rock cores in half, lenghwise, with a rock saw in the splitting room. One of the scientists, called a petrologist, decides the direction that the core should be split. A petrologist is a scientist who specializes in how rocks form. As you can see in the photos below, there can be fractures (cracks) in the rock. In some cases the fractures have been filled with a white mineral called calcite. Sometimes an orange-red color is seen; this is called oxidation or more commonly rust. These are all clues that the petrologist uses to learn about the history of the rock.