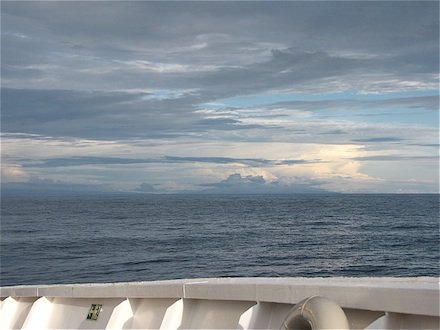 Finally, the storm we have had for three days seems to have moved on!

The JR is like a ghost ship…the labs are empty, scientists are sequestered with their data and computers.  The Techs are packing up all of the samples in preparation for the end of the cruise, although we still have at least one hole to go, and hopefully more cores to pack.

Last night, we moved back to Site U1412 on the toe and began preparations to drill a new hole here at this “high stakes” site.  This site is of great interest because of the possibility of drilling down to the active boundary between the plates to try to understand the interactions there.

We had our “End of Cruise” meeting today where information was disseminated to all of the scientists about how to ship their samples, closing up the labs, etc. Also, three sites were proposed as possibilities for the “Post-Cruise Meeting” in two years. After presentations from representatives from China, Brazil, and Austria, a vote was held by secret ballot and tallied up…and…the meeting will be held in China!

Many birds still hang out around the ship…we have resident swallows that made their mud nests under the ledges around the outside of the ship, probably while we were in port.  Every once in awhile, they get disoriented and end up in weird places. This little bird was sitting on the ground outside of the deck door near my office, so I took the rug from the doorway and set it in an out of the way place on the stairs. I picked him up and set him on it to recover. He was gone the next day, so I hope he recovered and flew back to his nest!

The storm has finally moved on after three days! It was nice to see the blue sky and rainbow bits in the sky.  People were out walking around the Helo deck again. In the distance, you can see the coastline of Costa Rica.  We are further from the Isla del Cano, but closer to the land.

And, a nice sunset to finish the day!

From the toe zone…