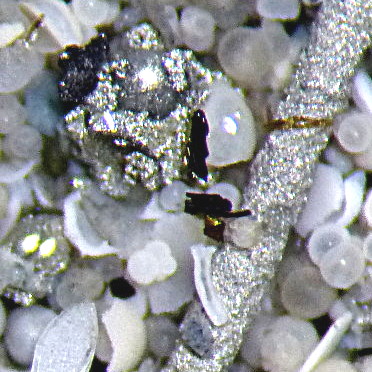 A drill core rests silently for millions of years, buried deep in the sediments underneath the sea floor until we drag it up into the light of day.

Some cores start showing surprises then: as soon as we open the surrounding plastic tube – the ‘liner’ – they start hissing and spitting mud. Sometimes we even have to wear gas masks because the gas causing the hissing can be poisonous. In other cores small black spheres can be discovered while observing them under a microsope. And very rarely the fossil remains of microorganisms – that can be found in almost every core – are covered by a silver or even a golden layer and look like jewelry.

The reason for all of these strange features (hissing, spheres, jewelry) is the greed for oxygen.

More or less every organism on earth needs oxygen.

It’s produced by plants and green algae under the influence of light and partly absorbed again in the dark. The rest is split up amongst animals, mushrooms and bacteria.

Oxygen can also be found in the sea water, one ton of it containing about the same amount found in the air inside ten basketballs. This oxygen, dissolved in water, is used by most creatures in the sea, be it fish, algae or the cells of microscopic plankton.
The smallest of these cells, the bacteria, can even live inside the mud of the sediments under the sea floor.

But that’s when the problems start.

The upper layers of sediment, only a few meters from the sea floor, can still be reached by the oxygen in the sea water. The bacteria use this oxygen to decompose dead organisms in the mud (which is more or less what will happen to all of us once we’re below the ground). But as more mud keeps drizzling down, increasing the mud layer above the bacteria, they get slowly cut off from their supply of oxygen.

That’s why they have to use other sources of oxygen.

Unfortunately this oxygen, although being present everywhere, is bound to other elements such as sulphur, forming sulphate ions (SO42-).

To use this oxygen is quite a task because energy is required to crack its bonds with sulphur. That’s why organisms try to use free oxygen (O2) in the air or in the water as long as they possibly can. But finally, deep inside the sediment, the bacteria have no other choice than to use the inconveniently bound oxygen atoms such as in the sulphate molecule – which, by the way, derives directly from the sea water.

During this process, sulphate (SO42-) and some atoms of Hydrogen from dead organisms react and release energy that the bacteria use to live. As a ‘trash’ product, water (H2O) and sulphide ions (S2-) are formed.

Everybody knows H2S, it’s the gas that gives off the typical smell of rotten eggs. It’s extremely poisonous (2% in the air that you breathe would be lethal). Therefore all life in the mud dies and that’s the end of the story.

At least until we drag the core to the drill floor. Then the hissing and spitting starts and we quickly have to grab the gas masks to not become another victim of the bacteria’s hunger for oxygen. By the way, that’s exactly the same process happening on the bottom of any shallow lake in mid summer, just stick your toes in the mud and smell…

It doesn’t have to come that far though.

Sometimes the sulphide ions (S2-) get grabbed by ions of iron (Fe2+) before they’re able to form the toxic H2S. The result will be iron sulphide (FeS), also known as pyrite or fools gold, shining golden, forming beautifully square-shaped crystals that make every collector of minerals cry of joy.

In the mud below the sea floor, pyrite rather forms small black balls or sometimes covers microfossils with a silver or golden layer.

And that’s how the bacteria’s craving for oxygen leads to drill cores exploding, leaving us in infernal smell, black balls rolling under the microscope and shouts of excitement yelling through the laboratories because of small golden pieces of jewelry in a piece of mud!