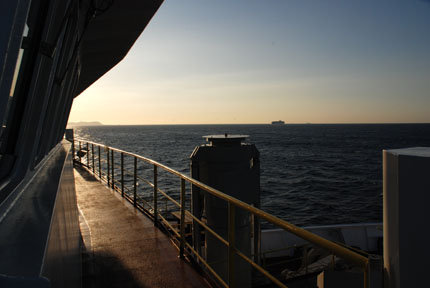 Note: For those of you movie-trivia-challenged, like the Bill Murray movie “Groundhog Day” where he has to keep living it over and over until he gets it right.

06:00 am.  Groundhog day.  The sun is shining bright and it is a beautiful dawn with calm seas as I stand on behind the bridge surveying the Japanese coastline near Suno Seki Point.  A tugboat lies several hundred meters behind our stern.   Apparently, it is the vehicle that delivered Rene, the RigNet technician to the ship to fix the internet problem.  At 06:20, Ron sees me on deck and tells me that the problem is fixed.  It was a bad parameter value entered into the tracking software.  I wonder why the mistake was made, but at least it is an easy fix, so maybe we can get underway soon.

08:15 am.  Underway, finally!  The speed is picking up and soon we are doing 10 knots.  The weather is fine and the seas are relatively smooth.  I hope we can make good time – it’s still 4 days of cruising to get to the first site, SRNH-2.

6:15 pm.  Ron found out that there is a pass of the International Space Station (ISS), so we wait on the observation deck to watch it fly overhead.  Red clouds in the west show the afterglow of the sunset. John spots it first.  But, hmm, it’s not quite as bright as predicted and it’s a little early.  Wow!  Now we see a much brighter light.  That has to be the ISS, it’s right on time and bright as Venus in the twilight sky.  Then what was that other light?  It must be the space shuttle.  Yeah.  The path and speed look the same, so that must be it.  Definitely cool!