Hey Scientists! What’s that Under There?!

Teacher Resource: Animals in the Deep Lesson Plan and Games
Hey Scientists! What's that Under There?! 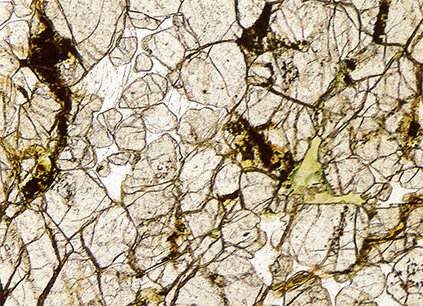 We Education Officers are in a tricky spot because we see everything that the scientists are discovering in these rocks, but because of the moratorium…we can only give you very cryptic clues about the specifics of this expedition. But some of these images they are examining under the microscope are so beautiful I can’t keep my mouth shut. The fact that gabbros are made of certain minerals is common knowledge, so I’ll give you a rundown of what a thin section is, and what types of things the scientists on expedition 345 should be seeing.

Once the rocks are pulled up from the seafloor, they are cleaned, cut, and tested for different things such as: gamma radiation, heat flow, and magnetic susceptibility (which just means the scientists are trying to figure out where north is pointing). All of these things help determine the age of the rock, and help eliminate all other possibilities until they are left with one…or a few really good possibilities.

But some of these tests still fall a little short when trying to determine other diagnostic components. When they’ve run all of these tests, and they are still uncertain about which specific mineral it is, the scientists take thin sections of a part of the core. A thin section is exactly what it sounds like: a very thin slice off the top of the rock’s surface. As if you used a knife to slice off a layer from a brick of cheese. Although, making thin sections from core isn’t that easy and definitely doesn’t taste as good.

The thin sections are examined under a microscope to see details that are too small to see by the naked eye. It takes years to understand what exactly you’re looking at and to memorize what each shape means. But these scientists have been at it for so long that it’s become second nature to them. This became clear to me when getting my thin section lesson. “…Well how did you know what that would be?” “…I just know…I can’t even really explain how I know anymore…it’s like driving a car, after a while you don’t remembered how you learned it.”

Some of the minerals in gabbro rock are: olivine, clinoperoxine, and plagioclase. Olivine has a dark color with a mesh like texture. The dark color comes from a chemical reaction of iron oxide that takes place as the lava is cooled. The grey color is clinoperoxine and it kind of reminds me of dead flakey skin cells. The clear represents plagioclase. This image was from expedition 147.

Here is a set of images taken from the Atlas of Igneous Rock and their Textures, a book I found on board. You can see in the first image a dark color, a grey color and a clear color. This is what you would see if you just looked at the slide of the thin section as is. The next image is of the same exact slide, but with a different angle of light passing through. The darker spots indicate where no light is passing through…or in other words: the components of the mineral are blocking out the light so you can’t see through it. The light, or ‘white’ areas, are the exact opposite where all of the light is coming through. And all of the colors in between show where certain minerals block certain wavelengths of light and allow others to pass. The crystals are prisms and they bend the wavelengths of light in various directions giving off the altered colors we see.

With the regular light from the microscope, this slide looks like it’s made of the same minerals…

but, by changing the angle of the light, you can see that it’s made of many different minerals.

This is a color chart that the scientists have memorized that helps calculate what color the mineral has to have according to the difference in wavelengths.

The scientists who are out here for these expeditions spend their time in the labs examining the core sections using various instruments. One of their tasks on board is to describe and document the core, which will be collected into this big book. Once the one year moratorium is lifted, scientists all over the world will have access to the samples from this expedition. Those scientists will look through this book at the descriptions made by the team on board now and will pick the samples they want. The samples will then be sent to their door step to be tested, examined, and scrutinized.