How fast is superfast? Part 2 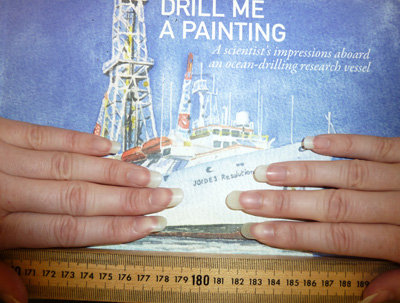 Last week, "The blogfish" made various interesting comparisons between the spreading rate at mid-ocean ridges and various things, such as fingernail growth. Here is a photo of the superlong fingernails of one of our young members of the science party, Michelle Harris, from the National Oceanography Centre, University of Southampton in UK. They grew about 8mm since the beginning of our Expedition, 4 weeks ago. If she let it grow one year, they would be about 10.5 cm longer. 10.5 cm/year : this is approximately the spreading half-rate of the East Pacific Rise 15 million years ago when the ocean crust that we are drilling was formed. Given the fact that Michelle has two hands (yes she does …), she’s the perfect superfast fingernail growing scientist for Expedition Superfast 4!

The picture behind Michelle’s hands is the cover of "Drill me a Painting", a beautiful book written and painted by Christine Laverne, a French colleague who has participated to seven drilling cruises, including the three previous ones here, at site 1256. The book tells the story of these 14 months at sea on the Glomar challenger and the JOIDES Resolution. It is available in both French and English versions, but the English one is unfortunately a bit difficult to find in bookstores. If you are interested, please contact directly the author, Christine Laverne (http://www.christine-laverne.com/en/).