iMonsoon: Life of a Sedimentologist by Kaustubh Thirumalai

he main job of the JOIDES Resolution (or JR for short) is to drill beneath the seafloor and to collect intact sediment cores. Once it gets started, the JR does a really, really efficient job of retrieving core. Every fifteen minutes or so (depending on the water depth at a location, the type of drill bit used, and the characteristics of the material being drilled), one can hear ‘Core on Deck!’ This chant is frequent enough to develop a Pavlov-like reflex.

‘Core flow’ is a JR term to describe the journey of a piece of mud from its inception at the drill rig to its resting place in a U-tube in the basement refrigerator. The scientists at the foremost part of the core flow are those in charge of measuring physical properties on the whole-round core (imagine a clear, plastic cylinder filled with sediments and rocks).

Next, the technicians onboard (who brought out the core from the drill rig via the ‘catwalk’ in the first place) proceed to split the whole-round core into two halves: the working half and the archive half. Many scientists now descend upon the working half, carefully sampling the mud for various chemical and physical measurements. It’s quite a spectacle – especially when we’ve hit a transition or a well-known boundary! What about the archive half? Well, this is where the sedimentologists come into the picture. 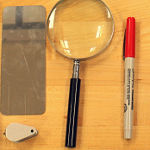