Why Starting a Relationship with a Hotspot is Going to be Complicated
Let’s take a look through the moon pool. 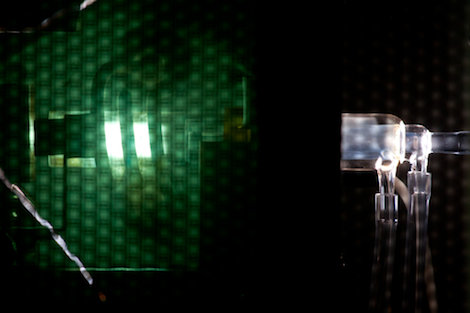 Here you’ll learn what the heck the subject of that picture is, and why it’s important to IODP Expedition 330.  Isn’t it pretty?

The ship’s crew and scientists were among the first on the planet to bring in the New Year because we are so close to the International Date Line, and therefore the first time zone to experience the new year.  It’s a tradition for the youngest and oldest people on the boat to ring the ship’s bell, located at the bow of the ship.  Since I’m sure one of the other bloggers will cover that (and I didn’t take any pictures, but you can probably find some here), I’ll stick to the science.  Suffice it to say it was a unique way to celebrate the passing of 2010.

Today I’m going to talk about some microbiology related science done by some other scientists on board the Resolution.  I was planning on showing you a bit of how I sample rocks, but the drill bit got stuck at site U1372A (the first site) and we needed to abandon that borehole a bit earlier than expected.  Because of that, there haven’t been any samples in a few days.  We just started drilling at our second seamount today and hopefully the new year will bring some wonderful samples with it.  If one wants to be a successful seagoing scientist, they need to be prepared for changes in plans- expect the unexpected!

That picture you see above is a close up of the business end of an Inductively Cooled Plasma-Atomic Emission Spectrometer, aka the ICP-AES.  There’s the full view of the instrument, below.  Sounds like science fiction, but that is a machine that’s being put to good use on this cruise by the geochemists (remember they are scientists who use chemistry to understand the rocks we find along the Louisville Seamount Chain).  The ICP-AES provides concentrations of major (Si, Ti, Al, Fe, Mn, Mg, Ca, Na, K, and P) and trace (Ba, Sr, Zr, Y, V, Sc, Cu, Zn, Co, Cr, and Ni) elements in the rocks collected here.  Major means there’s a lot of those elements in the rocks, minor elements are elements that are important, but there is less of them.  Knowing the concentrations of these elements in our samples is important because it tells us a bit about the different lava flows we are finding, and can help tell if two different rocks came from the same volcanic eruption.  Sometimes this is too hard to tell just by looking at the rocks.  It also helps us compare rocks we collect here with those from other
sites, like Hawaii.

So what’s this have to do with microbiology, you ask?  Well, it’s important for microbiologists to know the chemistry of the substrate their microbes are growing on- if I know the chemistry of these rocks, I can make predictions about what kinds of microbes I may find and then design tests for those guesses (or hypotheses).  Hotspot
rocks are typically high in iron and manganese (Fe and Mn), and I expect to find microbes that can use these elements to make energy for themselves.  Examples would be iron oxidizers, iron reducers, and manganese oxidizers.

Pretty cool, huh?  There are lots of other fancy instruments onboard as well, mostly for the geologists to play with.  I’m sure Becky Williams is discussing them in her blog, so I’ll stick to (mostly) the microbiology and urge you to read her blog as well for info on some of the more geological goings on during this cruise.  Until next time!