Understanding the Moon Pool (or, How Does the JR Keep From Sinking?)
March 2015

It’s a tradition on the JOIDES Resolution to hold a contest to design the expedition logo, which will be printed on t-shirts and featured on a wall onboard. The Bengal Fan expedition received six entries from the Science Party and Education Officers. The designs were displayed in the galley for two days so that everyone could vote for their favorite. The winner was this beautiful design submitted by Kimberly Rogers. Here, each participant describes in their own words the different elements of their logo and the inspiration for their design.

The design is inspired by many things. The mehndi patterns around the core liner represent the Indian subcontinent, and the tiger specifically represents Bengal (and the fan). The placement of the words “Himalayan Orogeny & Climate” above the tiger symbolizes the source above the fan sink. In a similar way, the transition from gold to blue in the mehndi patterns represent the ocean below and the sun above. The “Dr. No” flag flying on the JR is a reference to the system Exp. 354 scientists devised to mark unique features in a core that are not to be sampled, and the colors of the sun are a nod to the excellent sunrises over the Indian Ocean.

I wanted to include a reference to the Himalayas, the Bengal Fan and the (many!) seismic plots we’ve seen on the cruise, but I didn’t want it to be too complicated so I just used big block shapes and lots of colour. It was Petra Deken’s idea to include the little sampling tags at the bottom, which I liked because it has become a big part of our day!

The mountains at the top represent the Himalayas.  The bottom acknowledges our ports of call – Singapore (left) and Colombo (right) – using traditional Asian and Sri Lankan patterns. The centre features the JOIDES Resolution, with the derrick positioned in the Bay of Bengal over our transect of drill sites.  The fan-shaped lower portion with tiger stripes is a literal reference to the Bengal Fan.

Our Expedition invented the “no-flags” in order to protect certain intervals in the cores (e.g., well-preserved turbidites and some rare lithologies) from early sampling before further investigation. The technicians onboard designed really nice flags in a Jolly Roger style (skull and crossbones). The second thing I realised was that some people at the sampling table started to ask for “Dr. No” in order to call a
sedimentologist flagging these intervals. Hence, the James Bond film “Dr. No” (pistol design of 354, Dr. No, starring and co-starring) and the Jolly Roger theme (treasure map and skull and crossbones) were my inspirations.

I had some design ideas floating around for video animations, but didn’t get a chance to employ them, so I tried them out on the logo. I wanted to use the map Christian France-Lanord (Exp. 354 co-Chief) uses a lot – a side ways look of the Bay of Bengal, India, and the Himalaya and Tibetan Plateau. I wanted to exaggerate the mountains so you could really see what an orographic barrier they are to atmospheric circulation. Winds run into this mountain barrier, rise up, condense and cause a deluge of rain – the Asian Monsoon. It was fun to figure out how to make the Himalayas. I also really like the new JRSO logo – it’s clean and graphic. I flipped it, turned it white and put the name of the ship on the side. 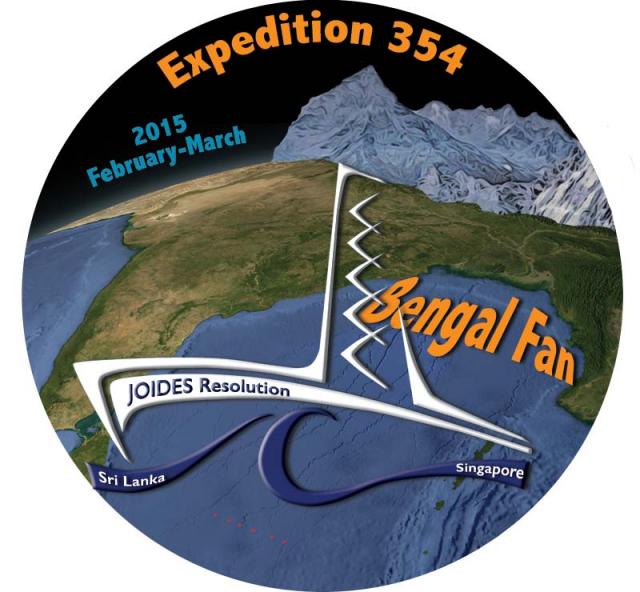 The Himalayas are the “Source” for the materials accumulated in the Bengal Fan, the “Sink”. Geological map of the Himalaya with main tectonic domains in Red (High Himalaya), Orange (Lesser Himalaya) and Yellow (Siwalik Himalaya); and the two main trunk rivers flowing east-west in the flood plains of Ganges and Brahmaputra. In the sink, we have the seismic profile with core section below the sites (in red). Bengal tiger as a representation of desire for re”search” and hunt down the evolution of the Himalaya and Monsoon (clouds above Himalaya) from the very beginning to present. 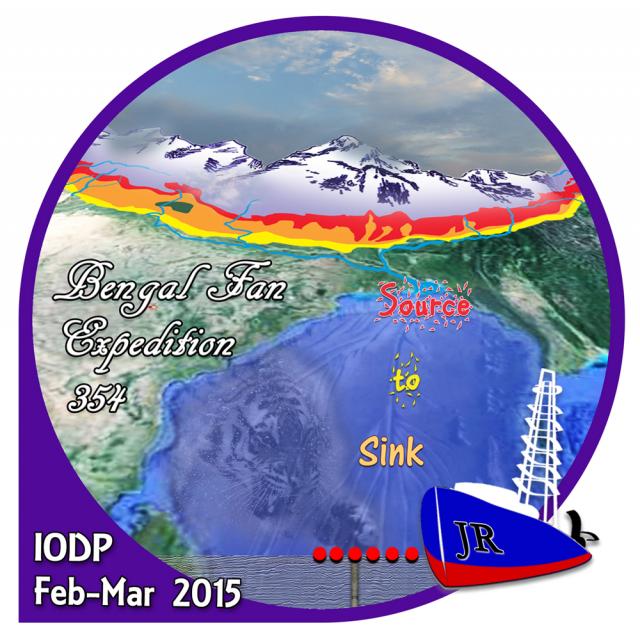