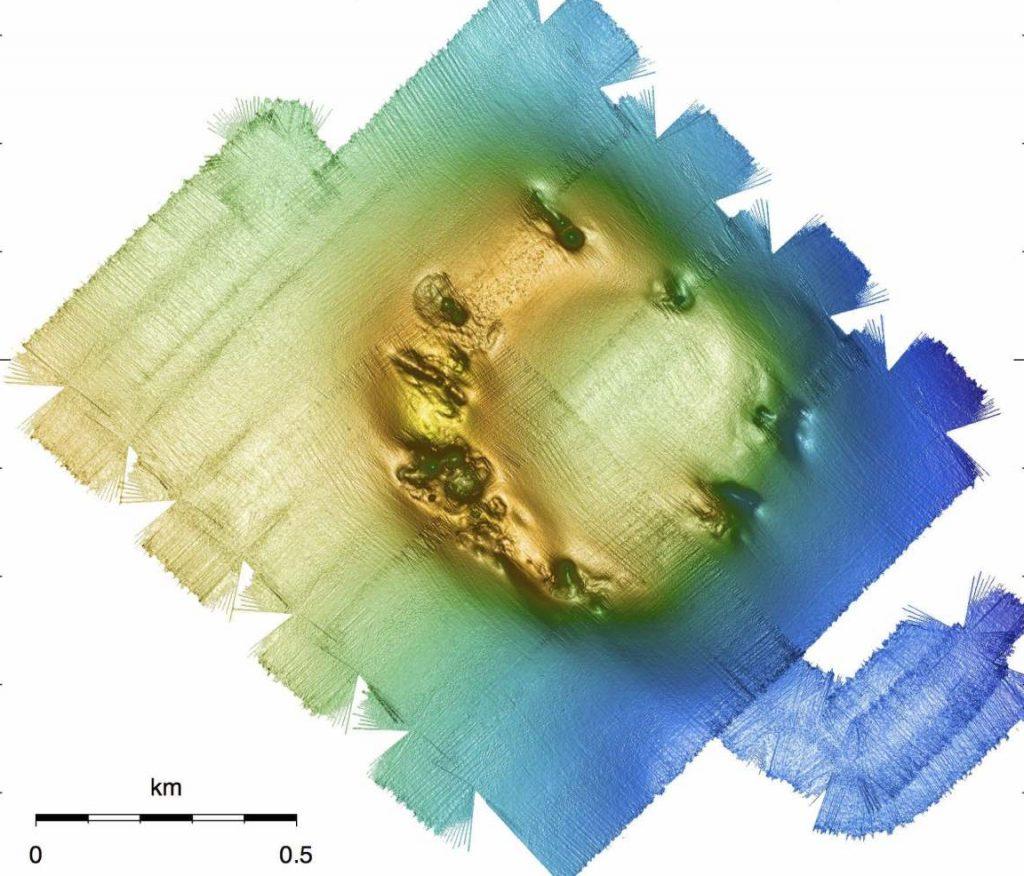 The massive sill site is finally completed, with yet another record depth of 540 meters — more than 70 meters of it hard rock. As boreholes go, this one was eventful and dramatic, but the only in the subsurface; the pre-drill camera check had shown that the seafloor looked unremarkable. However, now comes something totally different: a drilling site with seafloor scenery and animals that has been visited by submersible. It is time to introduce Ringvent!

A research cruise with R/V Atlantis, autonomous underwater vehicle Sentry, and submersible Alvin in 2016 put Ringvent on the map. In the top image, we can see this bathymetry (seafloor chart showing depth) made by Sentry. It looks like a ring-shaped mound on the seafloor. Alvin followed up immediately and carried a pilot and two observers (including this blogger) down 1,700 meters to have a look.

The mysterious site turned out to be a craggy mineral mound overgrown with methane-oxidizing tube worms (Lamellibrachia spp.) and populated with small white crabs (galatheid crabs, a.k.a. squat lobsters) that swarmed everywhere. A close-up of the seafloor reveals the chitin tubes of these worms, and in the lower left corner of the image the pink gills of some worms are still visible inside. The chitin tubes form growth rings that can be counted, marked with paint, and checked on another Alvin visit years later (of course, after marking the seafloor spot.) This exercise has actually been done in the Gulf of Mexico, and it showed that these tube worms grow very slowly; a fully grown “bush” can be over hundred years old.

As Alvin followed the Ridgeline of the circular mound, crevices, small canyons and eroded pits were everywhere. In some spots warm hydrothermal fluid emerged and sustained sulfur-loving microbial mats and hydrothermal vent tube worms (Riftia spp.) that could not survive without being bathed in sulfide-rich fluids that are their energy source. In the photo below, the shimmering warm waters obscure a Riftia tube worm, the same kind that thrives further south in the major hydrothermal areas of Guaymas Basin.

Here, Alvin samples a massive mineral concretion that was later sent to the Geophysics Department of UNAM in Mexico City, where it was identified as silicate — as all other mineral samples taken here. The entire massive mound turned out to be build from silicate or hydrothermal sinter, similar to the porous minerals that surround the hot springs of Yellowstone National Park. Hot fluids dissolve silica in the subsurface and, as they cool, they deposit their silica content as mineral crusts. This works obviously at 1,700 meters depth and at 2,000 meters above sea level.

What is driving this hydrothermal system? What is heating up deep fluids so that they transform buried organic matter into methane, and dissolve silica (which requires temperatures around 100ºC, and a little more does not hurt) and re-precipitate it near the seafloor? We are ca. 30 km distant from the hydrothermally active spreading center. Contemplating the outline of this seafloor mound will hint at the solution… more in the next blog!

One important clarification – JOIDES Resolution will not drill into these unusual seafloor communities, but keep a safety distance and drill into the sedimented central basin of Ringvent, and into the flanks of the mound ca. 150 m south.

This blog post first appeared on Oct. 14 on my daily blog of EXP385. Make sure to go to expedition385.wordpress.com to read the latest updates of this expedition!