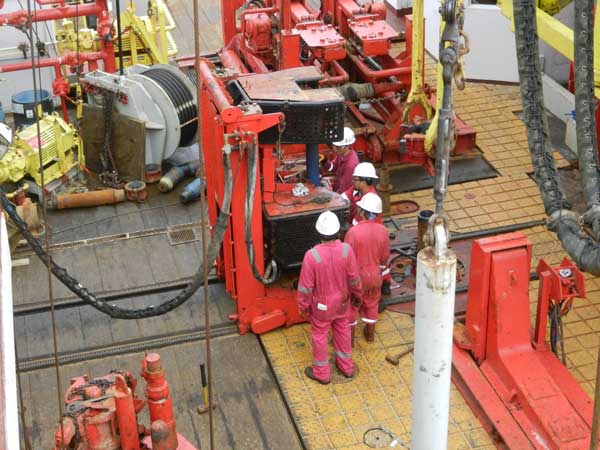 We’ve now arrived at our first site on Expedition 346 and the drillers are beginning to assemble and lower the drill pipe, which when completed will dangle nearly 3400 meters beneath the ship before even touching the mud of the sea floor that we came to collect. Yesterday we passed through the Tsugaru Strait that separates the main Japanese islands of Honshu and Hokkaido.

Though the passage was misty and the view often obscured by the low cloud cover, as night fell we had a wonderful view of twinkling lights on the coasts of both islands with mountainous terrain rising in the background. It was likely our last sighting of land for a while.

The site we’re sitting over up until now has been known simply as JB-3, with JB for Japan Basin. This is the site designation that appeared in the original proposal for this expedition and it is carried through until the actual drilling. Henceforth, this site will be known as U1422, the first of eight sites we will hopefully complete in the remaining six weeks of the expedition.

Site U1422 is the northernmost site we will drill in the Sea of Japan/East Sea. Our goal here is to recover sediments that span the last 4 million years, which is estimated to require about 200 meters of penetration below the sea floor. At this location and others, we will in fact drill and collect cores to this depth from three separate holes, each offset from the previous one by a few ten’s of meters. Why do we do this? The reason is simple. The coring system used by the JOIDES Resolution collects cores that are each 9.5 meters in length. The cores are then pulled up through the center of the drill pipe and the pipe then moves down an equivalent distance. Because there are sometimes small gaps between the cores, or a bit of disturbance, the three holes (usually designated A, B and C) are staggered in depth so that between them a complete and continuous sequence – what we call a splice – can be reconstructed. Constructing that splice onboard is the job of the stratigraphic correlators, two brave individuals who spend 12 hours a day or more staring at large computer screens and matching long series of wiggly data. Recall that one of the main scientific objectives of this expedition is to study the history of the East Asian Monsoon, so having continuous climate records with no gaps is critical to our mission.

I promised in my first blog entry to talk a bit more about the Monsoon but I’m going to hold off on that and describe instead one of the characteristics that makes the Sea of Japan/East Sea such an interesting and unusual place. The Tsugaru Strait we steamed through to reach our location is fairly shallow by ocean standards; the water depth at its maximum is only about 130 meters deep. In fact, if you look at a map of the Japan/East Sea that shows the sea floor, you will see that the large basin that makes up this Sea is largely encircled by land, with connections to the open ocean at only a few locations like the Tsugaru Strait itself. None of these connections are deeper than 130 meters. The reason this is so cool is that during recent glacial periods we know that sea level dropped by 120 meters or more because the water that made up the great ice sheets in the Northern Hemisphere ultimately came from the ocean. Now if you think about it, what that implies is that the Sea of Japan/East Sea was largely isolated and cut-off from the surrounding ocean during the ice ages. Imagine that! In fact, previous work on sediments in the Japan/East Sea suggests that during the last glacial at least, the basin we’re now set to drill in experienced periods where the deep waters became anoxic, which means that there was no oxygen and hence no life. Could this be related to the basin’s isolation at these times? That’s a good question, and one we hope to answer. But first we need to collect some mud.