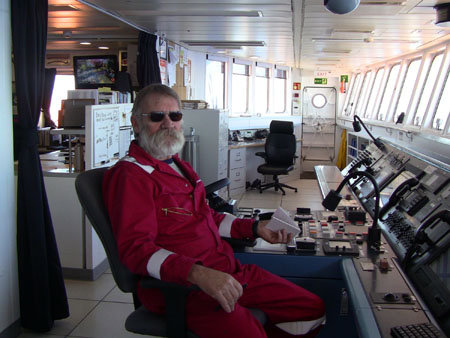 We have arrived at site U1370 and the first core will be arriving on deck in about an hour. The seas are a lot calmer than yesterday but the sky is completely cloudy (photo below). A few albatross are sitting off the port side of the ship this morning. Large ships have many crew members, each of who has specific responsibilities so that nothing gets overlooked. Today I am going to highlight our Chief Mate.

Jerry Embry is the Chief Mate on Expedition 329 of the JOIDES Resolution. He grew up in St. Louis, Missouri and joined the Navy at 17 years of age. During his four-year tour of duty, he gained a lot of experience in deck work (various jobs on the outside of a ship). He went to school in New Orleans and got his Mate’s license.

As Chief Mate, he is responsible for quite a few people. He oversees the crane operators, those that maintain the ship’s exterior, and the loading and unloading of all the ship’s supplies. Also, under him are the second mate, who takes care of the navigation, and the third mate, who is the safety officer.

Jerry has been out at sea since 1965. Over the years, he has worked on a variety of ships and even worked on board the JR when it was an oil exploration vessel. His work schedule is 2 months on and 2 months off. During his time off, he goes back home, which is Costa Rica. He has a 66-acre farm, which was once a cattle ranch, but now provides food and shelter to many wild animals. Jerry has planted thousands of trees, the fruit trees being a favorite of the monkeys and birds.