Kevin supervises the drilling operations on board.

Test Guam
The Adventures of Sid the sediment. How does Yuho use Sid to age sediment? 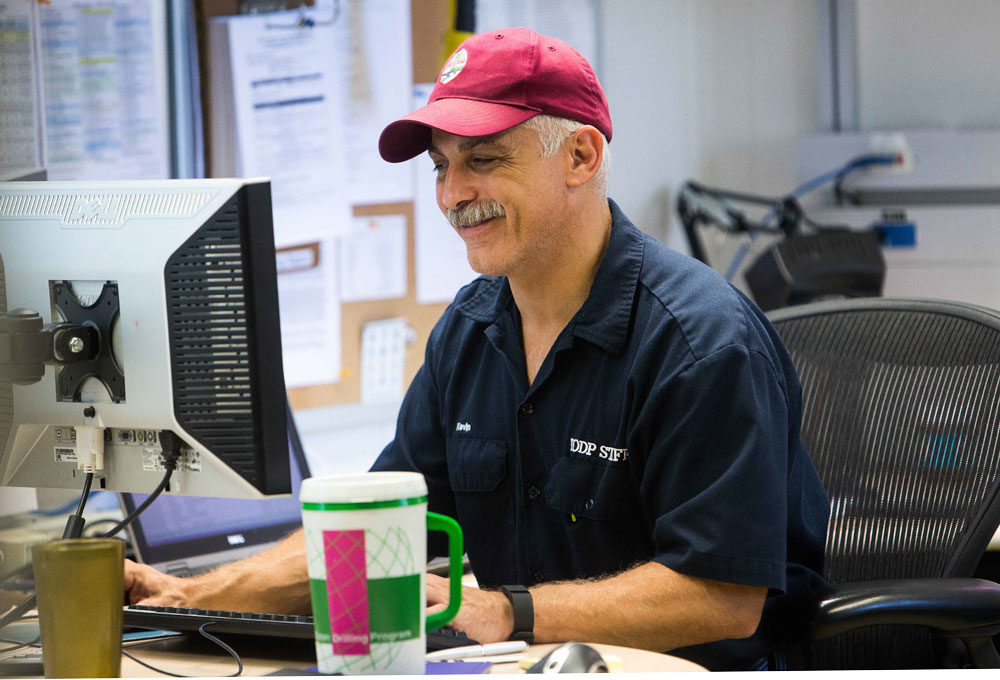 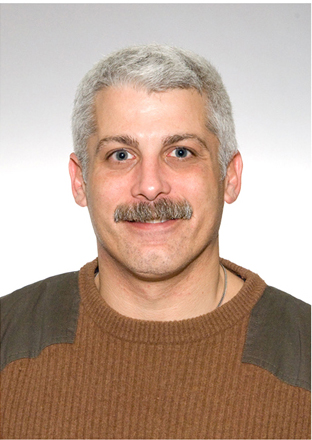 KevinKevin, the ‘operations superintendent’, has been working for the International Ocean Discovery Program (IODP) for the last 15 years since graduating from Texas Agricultural and Mechanical University (TAMU). In his early career he worked as a mechanical designer but decided to return to study in his late 20’s. With some trepidation he moved with his young family so that he could start his course. It quickly became apparent that he had made the right choice. He and his family enjoyed their experience at TAMU and living in the area so, when he had the opportunity to stay on to work for the IODP at the end of his course they were thrilled. Initially he worked as an engineer focusing on special drilling tools. He sailed about once a year in expeditions requiring specially drilling tools and expert knowledge. His first expedition was drilling for methane hydrate.
Methane hydrate is a crystalline solid that occurs when methane is formed underwater in combinations of low temperature and high pressure. A cage of water molecules surrounds the methane molecule. This forms a white solid. This solid rapidly decomposes to water and methane as temperature increases and pressure decreases. This makes drilling cores containing the hydrate difficult as the hydrate must be kept under pressure as it is raised from the sea floor to stop it subliming. Kevin was responsible for the special coring tools used on this expedition. Once on deck the cores were placed in ice to keep them cool and slow down the rate that the hydrate decomposed.
Kevin first had the role of supervisor on expedition 309 looking at an area of the sea floor that is spreading very rapidly. Sea floor is made when two tectonic plates are moving apart or diverging. Basaltic magma wells up to fill the space left as the two plates move apart. This results in the youngest rock being nearest the boundary between the two plates. On this expedition they were drilling down to the Moho, which is where the crust meets the mantle. 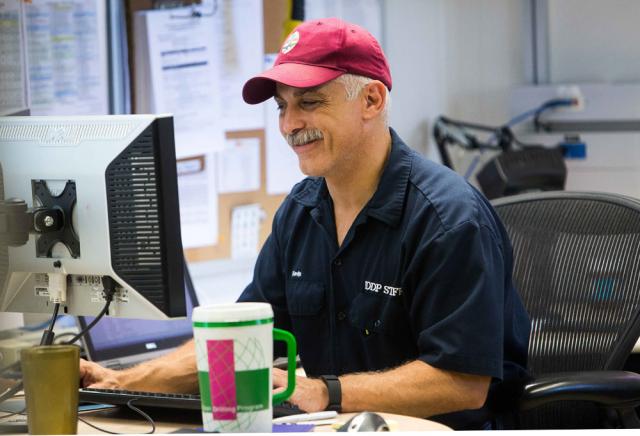 Kevin has to work closely with the team on the drill floor. This team consists of the driller, rig workers and the derrick man. The team assembles the drill and lowers it to the sea floor. Kevin makes sure that he regularly spends time out on the drill floor as part of the drill floor team so he maintains a good understanding of the challenges that the team is facing.
Whilst working at sea Kevin feels he achieves a lot as he can focus on his work. He enjoys working with the others on board the ship and meeting new people from a diverse range of backgrounds. He also likes the opportunity to see places that he would never normally visit. Kevin is happy with the balance of time at sea to time on land that her works; he has 2 months at sea and 4 months on the land. This means he works with both crews on the ship and gets a good overview as to what goes on. He enjoys life on the ship but is happy to have more time in Texas with his family and friends than on the water.
EXP363
25
Nov 2016
By Katie HalderUncategorizedLeave a comment