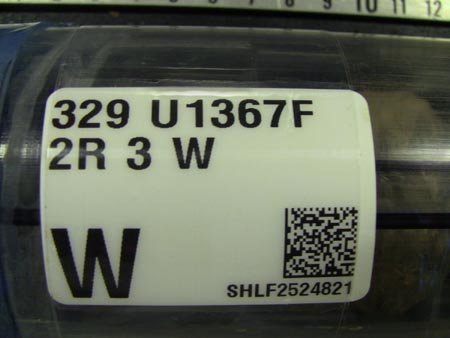 We began drilling into basalt yesterday and we are continuing today. Since basalt is much harder than sediments, it is taking much longer to penetrate the material and a different bit needed to be attached to the drill string. This meant that all of the drill pipe had to be pulled up, drill bit changed, reassembled and lowered (called tripping the pipe) to the seafloor again.

The seafloor basalt appears to be highly fractured, rather than one solid piece. The core liner is therefore filled with rock chunks or fragments, which then need to be split one by one. It is important to make sure everything is kept in the same relative position within a core. The same is true for the 1.5 meter sections of core. We need to know what order they were originally in. This is where labeling becomes very important.

A label is printed and attached to each core section before they get moved around the ship. The label (see photos) includes the expedition number, the hole number, the section number and type of coring tool used, and finally a letter to indicate which split core halve it is. A "W" means it is the working half, this can be sampled, etc. The letter "A" indicates it is the archive half, which is off limits for sampling. It is essentially stored, unsampled, for reference purposes in the future.

Scientists must also look over the cores and decide who gets what for sampling. In the case of cores with rock fragments, there may be more than one scientist wanting to work on the same fragment. Discussions are used to sort out these "conflicts." Negotiating is an important skill.