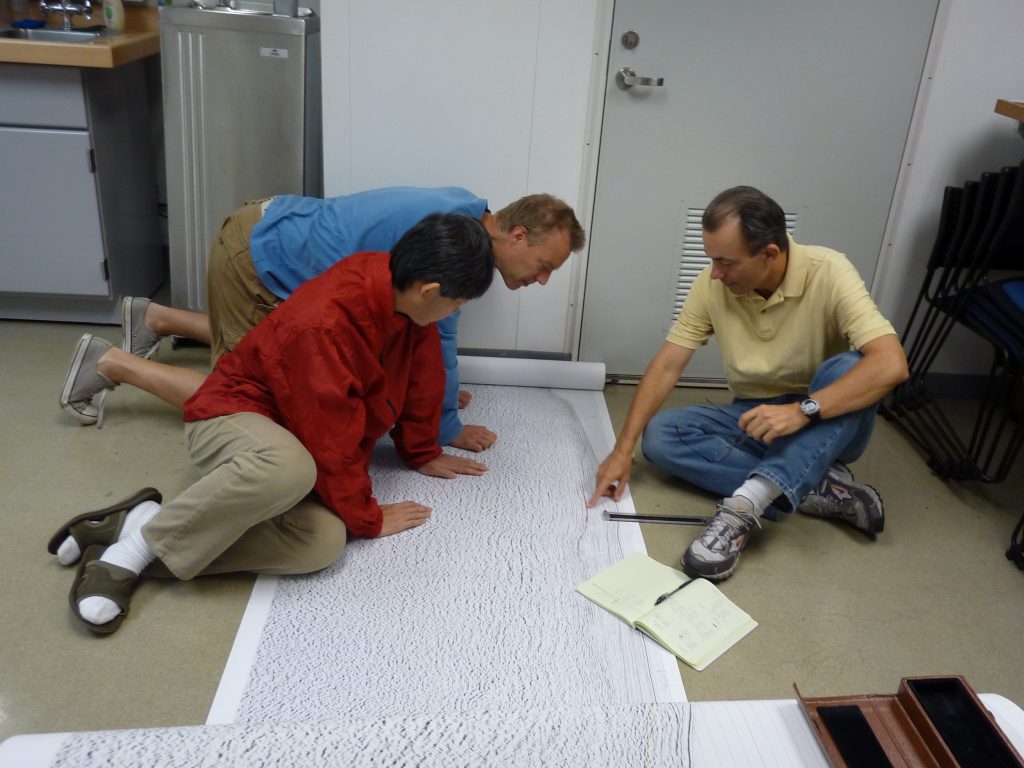 9 October 2009     Oh-oh.  We just started drilling at Site U1349 about a day earlier when we got our first core from "basement".  This is a term geophysicists use to describe the lowest strong, coherent reflector on seismic reflection profiles.

And at Shatsky Rise, we are hoping that basement consists of basaltic lava flows, which is what many of the scientists have come here to study.  So late on the 8th, I got word that from one of the volcanologists that basement was not lava flows, but volcanic tuff, a porous material made mainly from volcanic glass (like Diamond Head in Honolulu) and often badly altered by long exposure to seawater.  Interesting, but not what we were hoping to see.

So now what?  Try to drill through it in hopes of reaching lavas?  Maybe.  But the tuff could be hundreds of meters thick.  I quickly pulled out the site survey seismic section and checked it out.  Sure enough, it looked like we placed the site on a buried tuff cone because it was a place with shallow basement.  Can we drill through it?  Some quick calculations made it seem probably too thick to plow through (100-150 meters).  Some more quick calculations and I figured that we could abandon this site and go to an alternate site 100 km down the flank in less time than it would take to drill through.  So I woke up the sleeping Takashi and Joerg to discuss our options.  I talked to several scientists about what they would like to do.  Ron, the operations superindendant, apparently a light sleeper, heard me wake up Joerg and came to see what plan we were hatching.

After discussing alternatives for an hour or two, we heard from Sam "the driller" that the drill had hit something hard.  Could it be basaltic lava?  We waited.  And waited. Finally at around 7 am the core came back.  Basalt!  Yes!