End of the site
Underway 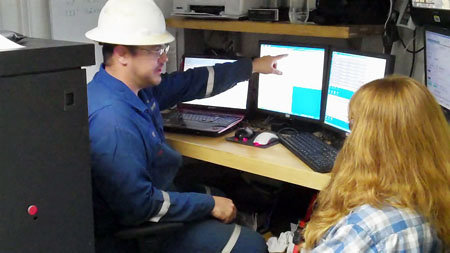 Hole U1368F has been drilled to a depth of 115 meters and has been logged. The process of logging is where tools or instruments are lowered by wire down to the bottom of the hole. As the logging tool is pulled back up it takes physical measurements of the rock layers. Scientists use this data to interpret what lies hidden beneath the surface. For example, the oil industry uses logging to determine if oil can be extracted in a profitable manner. In our case, on the JOIDES Resolution, it is used to learn about the rocks themselves.

Several types of instruments are strung together to make up a logging string that is about 25 meters in length. The first string that we lowered had three instruments for determining the density of the rock, the amount of natural gamma radiation, and the electrical resistivity of the rock. The second logging string had other instrumentation; it contained a formation microscanner tool, and a sonar velocity instrument. The formation microscanner tool can show fractures, layering, and even the angle of the layers.The drill bit used to cut into the basement rock presents a problem for the loggers, so it is released and dropped into the bottom of the hole. The pipe is raised about 20 meters and then the logging string is sent down the pipe to protrude out the end to do its work.Logging data is used in conjunction with the data obtained directly from the cores. On the ship, the recovered cores are run through instrumentation that looks at the same physical properties as logging down hole.Since core recovery is often not complete, logging can help to fill in information for some of the missing data.

Helen Evans is the scientist doing the logging on Expedition 329. She works at Lamont-Doherty Earth Observatory at Columbia University. Clayton Furman, who is employed by a private company, that makes the logging equipment, is assisting Helen.