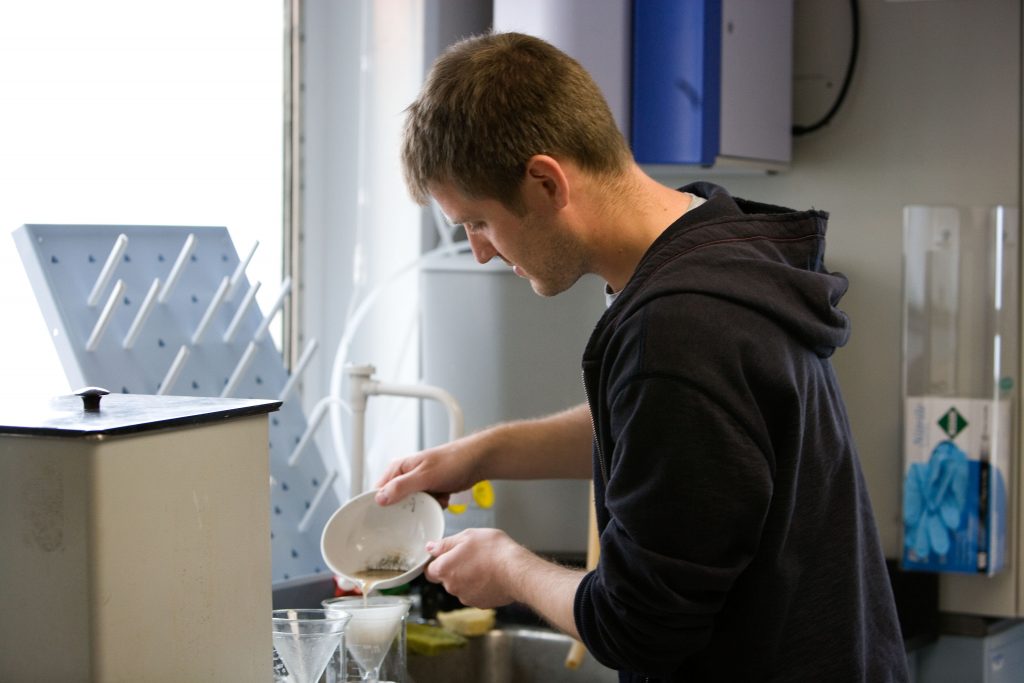 Processing
The first few samples were easy. Katrine had to do them on her shift! This was unfortunate for her but definitely useful for me as I was able to watch and take over a fully operating station rather than set it up from scratch. Katrine and I had worked at setting it up as best we could before the first samples arrived, but the first few were always going to be nervy. Pretty soon it all became second nature.
The first part is to collect the ‘core-catcher’ sample from the guys on the catwalk and bring it in to the lab. This is the extent of our involvement outside. The sample needs to be split into 6 smaller ones of different sizes for nannofossil, diatom, radiolarian, dinoflagellate and foraminiferal analysis. Each sample consists of a particular sized piece of deep sea mud and processed in a different way. Katrine and I do the forams. There are 8 micropaleontologists in total.
After all samples have been entered into the electronic system we weigh the foram sample and add very hot water and sodium hexametaphosphate (washing powder). After leaving for about 10 minutes to an hour the clayey gloop is washed through a 63 micron sieve (0.063mm) to remove the clay particles. Almost all forams are well over this size, usually 100-300 microns. This part is usually rather time consuming and annoying as either the clay is too gloopy and gums up the mesh, or too hard and takes a long time and a lot of (gentle) squashing with the fingers to get it through.
We then decant the floating particles off onto one filter paper to remove the vast amount of diatom material present, and the rest is poured onto another paper containing the forams. This is dried in the oven and then put into vials for the second part – analysing the sample. This is, of course, if the next sample hasn’t already come up on deck for processing (every 15 minutes to an hour)!
Next time Sev will explain the process of analyzing the foram samples that they’ve collected.
Bering SeaBering Sea Expedition 323 JOIDES Resolution micropaleontologyExpedition 323JOIDES Resolution_102micropaleontology
01
Aug 2009
By Sev KenderUncategorizedLeave a comment