What's the Signal?
Micro with Maria 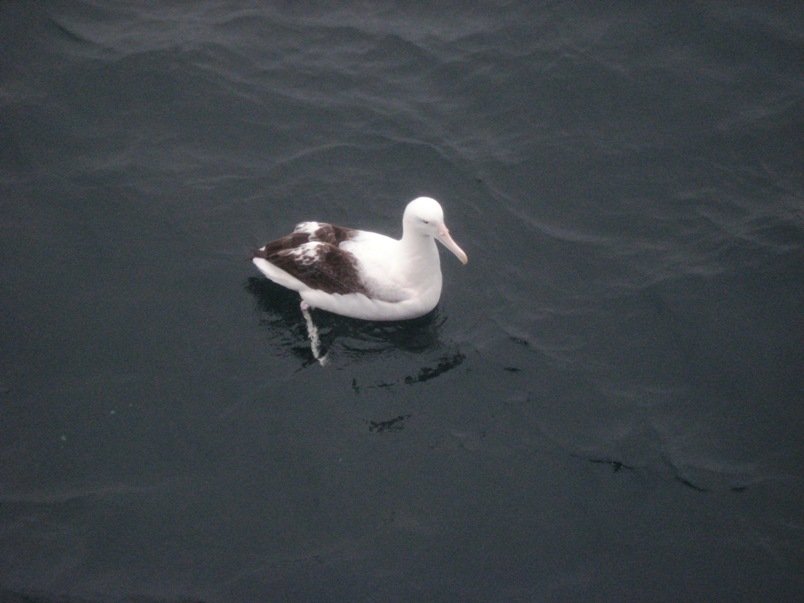 Being at sea for so long, you have to kind of replace your old routines with new ones.  I’ve incorporated some new friends into my routine.

Of course, I had heard of albatross before I came on the JR, but I’ve discovered something.  These birds are kind of like Niagra Falls – it doesn’t seem all that impressive until you see it in person.   There are several types of sea birds who have been keeping us company on this expedition.  Albatross, Cape Petrels, and Giant Petrels are the ones I’ve managed to identify.

Watching these huge birds soar around the ship is so calming-I could watch them all day.  They have a wing span of about 10 feet.  These are not small birds!  The cape petrels look small next to the albatross, but they’re probably twice the size of a pigeon.  They flap their wings a few times, then soar for what seems to be incredible distances.  On windy days, they play in the wind, flying into it so it seems like they are just hanging in the air.

I like to imagine that the bird in the picture is the same one I see every day, and that he comes to visit me.  Of course there are hundreds of birds, so I probably haven’t seen the same one even two times, but I call “him” Albie.  Not very original I know, but it suits him!  So, part of my new routine is to go out and say Hi to my new friends a few times a shift, and stroll around the deck.