We've Got Core…Now That Takes Teamwork!
If the Seafloor is Spreading, Then Why Doesn’t it Take Over the World? 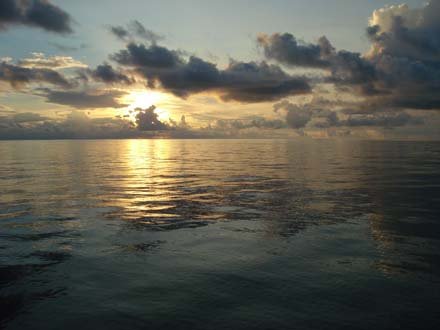 When the sun goes down on the JOIDES Resolution (known affectionately as the "JR"), that’s when things really get interesting around here.

During an expedition, for as long as the JR is out at sea (usually six to eight weeks at a time), everybody onboard works 12 hours a day, 7 days a week.  So that we can get as much done as possible, we work in staggered shifts — which means there are always people working on the ship — no matter the time of day or night.  And that means the lights on the JR stay on all through the night, casting a halo of light into the water alongside the ship.

Fish are drawn to these lights — and creatures who like to hunt and eat these fish follow them into the light.

So, if you stand on one of the ship’s upper decks and look into the sea for long enough, you’ll begin to see night creatures gathering for the hunt.  Swallowtail gulls who look like they’re flying endless ‘laps’ around the ship, when what they’re really doing is waiting for that perfect moment to pounce on an unsuspecting swimmer down below.  Long, tubular, pastey-white squid who cut through the inky blackness hunting for their own private ‘filet-o-fish’ dinner.

And sometimes, you’ll catch sight of huge schools of little darting fish (are they anchovies?) that tumble and roll through the water in one gelatinous, shifting mass of light and shadow.

One night about 3am, some of our scientists who work on the night shift saw a gigantic school (so big we landlubbers might call it a swarm!) of flying fish.  There were thousands of them, they say.  The school was so big, they swear it stretched almost the length of the ship, which is 470-feet long (144 meters).  Can you imagine?

These little fish jump up out of the water and glide along in the air for long seconds before falling back into the ocean.  A bit like shiny skipping stones launched by boys along the seashore. That night, there were so many of these fish, the swallowtail gulls hardly had to work for their dinner.  They just landed on the surface of the ocean and tipped their heads slowly down toward the waves and brought their heads back up in one lazy motion, beaks full, everytime.